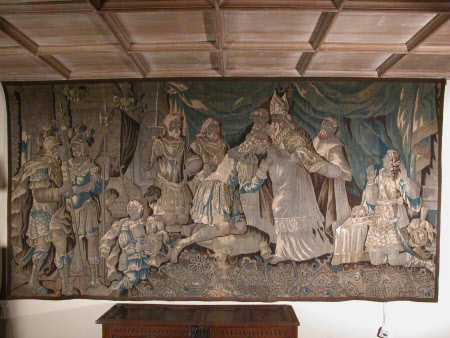 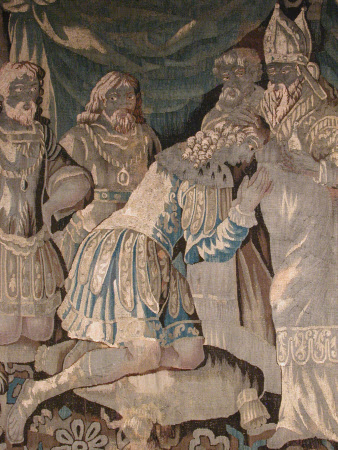 Tapestry, wool and silk, 4 warps per cm, The Coronation of Charles VII, Aubusson (possibly Corneille workshop) c.1660-1700. A wide rectangular panel showing the consacration of Charles VII, King of France at Rheims. In the centre Charles VII kneels upon a cushion before the High Priest, who rests one hand on Charles’s head and in the other holds a vial containing the oil of Clovis with which to anoint the king. Behind Charles and the High Priest kneel four of Charles's courtiers, including Dunois on the left holding aloft the sacred sword. To the left a small boy kneels holding the king’s helmet, and behind the boy, at the far left, stand two soldiers wearing helmets and holding pikes. To the right of the main figures is a low table with a crown upon it, beside which Joan of Arc kneels, arms raised in veneration. The main figures stand upon a carpet with an abstract pattern, and behind them hangs the blue banner of King Clovis. The tapestry does not have borders but a later brown wool repp galloon has been attached around all four edges.

The Coronation of Charles VII is a central episode in the story of Joan of Arc, whose intervention in the Hundred Years War (1337-1453) helped to bring about the end of English occupation in France. The daughter of a farmer in Domrémy, eastern France, as a young girl Jeanne heard voices giving her instructions from God to save France from English oppression. She led the French army to a string of surprise victories in 1428-9, including a successful march through English-occupied territory to Rheims, the historic site for the coronation of French Kings, so that Charles VII could be crowned. Jeanne was captured by Burgundian forces at Compiègne in May 1430 and put on trial the following year by a court composed of English sympathisers, who found her guilty of heresy and had her burned at the stake. Jeanne was nineteen years old when she died. The tapestry at Packwood is one of a series representing scenes from the life of Joan of Arc, woven at Aubusson in the second half of the seventeenth century. The designs were largely based on a series of prints by Abraham Bosse after Charles Vignon, which illustrated Jean Chapelain’s (1595-1674) epic poem ‘La Pucelle, ou la France deliveré’ (The Maid, or France Delivered), published in 1656. The tapestry at Packwood is based on Bosse and Vignon’s illustration to book 8 of Chapelain’s poem. Chapelain describes the setting in the church of Saint-Denis, the raised dais on which the coronation took place, and the moment when Charles was anointed with the sacred oil, all of which are visible in Vignon’s design and in the tapestry. The man kneeling on the left of the tapestry is identifiable as Jeanne’s companion-in-arms Dunois, holding the sacred sword with which the King was knighted. Although the principal figures in the tapestry follow the print fairly closely, one crucial change has been made: in the original design there is an altar at the right hand end of the dais, and Jeanne kneels in prayer before it, whereas in the tapestry design she has been turned around to face the King. Some of the background elements have also been altered or omitted, and there is a general simplification in the rendering of detail, evident for example in the patterned carpet. A number of sets of the ‘Story of Joan of Arc’ tapestries are known to have been woven at Aubusson from the same set of cartoons. In 1668 a citizen offered a set of six tapestries with the story of ‘La Pucelle d’Orléans’ to decorate of the choir of the church of Saint-Eusèbe, Auxerre, but these are now untraced (Stein 1916, pp. 139-140). A set of eight was formerly at the Château de Comblat, and another set of seven was at the Château d’Espanel, near Molières, but both are now untraced (Forestié 1878; Pérathon 1894, pp. 32-34). A set of four belonged to the curate of the church of Saint Ouen, Rouen in 1894, but these are also lost (Pérathon 1894, p. 79; Stein 1916, p. 145). Extant examples include a much-damaged set of six in the Centre Jeanne d’Arc, Orléans and a number of single panels, including a version of the ‘Coronation of Charles VII’ in the Cathedral of Rouen, and another with the art dealer Atalante in Madrid. A number of the tapestries formerly at the Château de Comblat bore the signature ‘M R DAVBUSSON. IACQUES CORNEILLE’, as does the panel currently with Atalante. ‘M R DAVBVSSON’ is an abbreviation of ‘Manufacture Royale d’Aubusson’, and dates the tapestries to after 1667, when Aubusson was granted the status of ‘Manufacture Royale’. This corresponds with the date of the offer of a set of tapestries to the church of Saint-Eusèbe, Auxerre in 1668. It is however possible that versions of the set were woven before this date. ‘IACQUES CORNEILLE’ is almost certainly the master weaver of that name mentioned in a notarial document in 1652, quoted by Pérathon (Pérathon 1886, p. 349). Corneille was part of a dynasty of Aubusson master weavers active in the seventeenth and eighteenth centuries, but his signature does not appear on any other known tapestry set, and there are no firm ground for an attribution of the Packwood panel to Corneille. (Helen Wyld, 2009)