Boy leaning on a Windowsill, holding a Birdcage 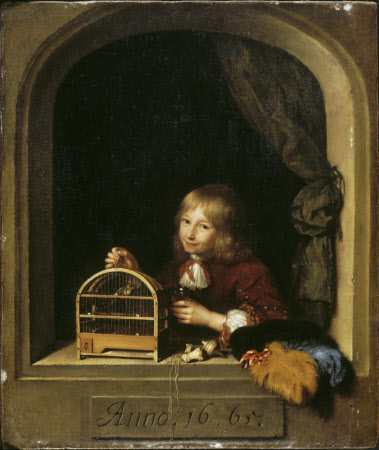 Selected as one of our favourite things by Andrew, volunteer room guide. He admires 'The glowing, vibrant colours and miniscule brushwork and detail.'

Oil painting on panel, Boy with a Birdcage/ Boy leaning on a Windowsill, holding a Birdcage by Caspar Netscher (Heidelberg 1639 – The Hague 1684), inscribed on stone plaque on window ledge wall: Anno.16.65. The picture shows a half-length image of a boy, his right hand holding a bird cage, with his left hand offering it a glass of water, apparently leaning over a balcony or similar, with an arch over his head. A young boy wearing a red-brown jacket and white cravat leans on a window ledge, looking out towards the viewer. In his right hand he holds a bird cage, which rests on the ledge. To the right, by the curtain pulled to the side, is a hat with yellow and blue feathers and toys: a spinning top and knucklebones on a string. Children with birds were a common motif in Dutch 17th-century paintings, they were common househhold pets and carried other meanings like a love symbol; a suitor happily enslaved by love, although the boy in this picture may be a little young for such connotations. It is thought to be a copy of a lost original by Pieter Cornelisz. van Slingelandt. This composition is based on the painting by Frans Van Mieris I in the Staatliche Kunsthalle Karlsruhe.

Recto: painted so as to look like an inscription on a stone tablet underneath the window opening: Anno. 16. 65.