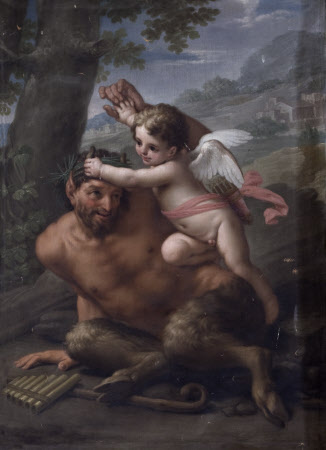 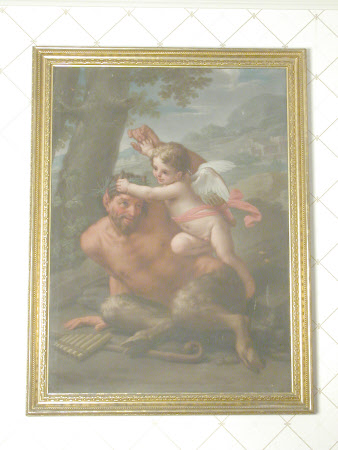 Charles Lucy was a pupil of Cignani (1628-1719), a Bolognese, Baroque artist and a cousin of the Lucy family of Charlecote. He worked mostly in Rome. He undertook to make various copies and pastiches of Old Masters for George Lucy (1714-86), who had visited Rome whilst on his Grand Tour. It appears that George Lucy was also paying him an annual grant. This picture is after one of the Carracci brothers, probably Agostino.

Oil painting on canvas, Cupid attacking a Satyr (after Francesco Mancini), attributed to Charles Lucy (London 1692 - ?Rome after 1758), after Francesco Mancini (Sant'Angelo in Vado 1679 - Rome 1758) Satyr and a cupid in a landscape setting with large tree in top left corner and Italian style buildings in the background. The Satyr is seated with his stick and pan pipes by his right hand. A playful cupid, with a pink sash holding a quiver of arrows, is holding one of the Satyr’s horns. In a large, English mid-18th Century version of a Maratta frame.