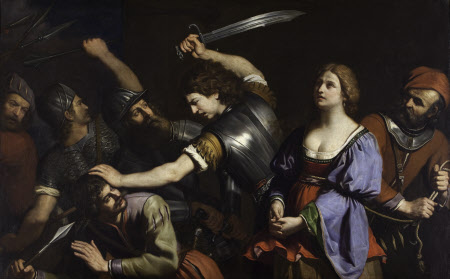 This picture was traditionally titled ‘The Inspiration of Cassandra’, but actually shows Coroebus plunging to his death amongst the Greeks, in despair at the capture of Cassandra. The episode is taken from Virgil’s epic poem, ‘The Aeneid’ (II.403-426). Lorenzo Gennari was Guercino’s assistant between 1615 and 1630, when he moved to Bologna and gave up painting. The picture was once attributed to Guercino, but it is too clumsy to even be a copy of a lost painting of his. It is certainly an autonomous work by Gennari, but based on drawings by Guercino.

Oil painting on canvas, Cassandra and Coroebus, attributed to Lorenzo Gennari, known as Ariminese (Cento (1595 - Rimini 1665/73), 1615/30. At the fall of Troy: Coroebus plunging to certain death amongst the Greeks, in despair at their capture of Cassandra, as related in the roman poet Virgil's Aeneid (II 403-426). Large oil painting which depicts a solider in breast plate with sword aloft in right hand ready to swing. He is pinning down Coroebus with his left hand. Coroebus is holding a spear and is surrounded by three other soldiers dressed in armour. Cassandra is to the right in a blue and red dress with green trim at cuffs, the man at the far right is holding a rope which is tied around her waist. Framed in large giltwood rectangular frame, plain in style. Probably J. Edward Knight (d.1812) of Wolverley House, Kidderminster, & Portland Place; sale of his nephew & heir, John Knight, of Portland Place, Phillips, 23-24 March 1819, 2nd day, lot 88, as: "Guercino, Cassandra delivered from captivity" (bought in at 85 gns); Frank Hall Standish (1799 - 1840), Duxberry Hall, Lancs.; his sale, Phillips, London, 31 March 1827, lot 76, as: "GUERCINO A noble Historical, CASSANDRA delivered from Captivity"; purchased 1827;