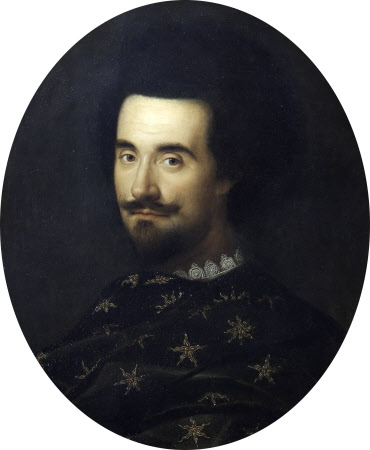 Oval oil painting on copper, Sir Edward Herbert, later 1st Baron Herbert of Cherbury (1581/2 – 1648) by William Larkin (London c.1585 – London 1619) c.1610. An oval, head and shoulders portrait of Sir Edward Herbert. Positioned half left with a direct gaze with the spectator. He has dark hair and moustache and beard. He is wearing a dark green habit with stars embroidered in gold. In an oval giltwood frame. Thomas Lucy III was a friend of the poet, philosopher and diplomat, Edward, Lord Herbert of Cherbury, who saved him from drowning when their ship foundered on Dover pier in 1609. It is possible that Herbert may have presented Larkin’s oval portraits of himself and Lucy (533854) to commemorate the event. Herbert wrote in his memoirs: “A faithful servant of his taking Sir Thomas Lucy out of the cabin who was half dead of sea-sickness, put him into my arms, whom after I had received, I bid the shallop [small boat] make away for the shore.”