Cleopatra and the Pearl 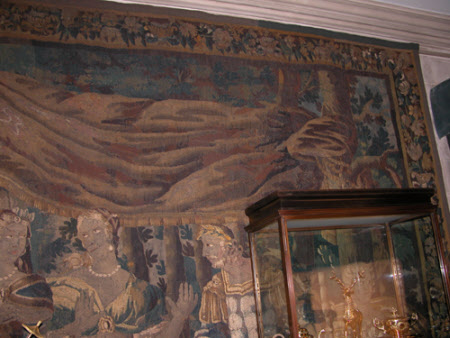 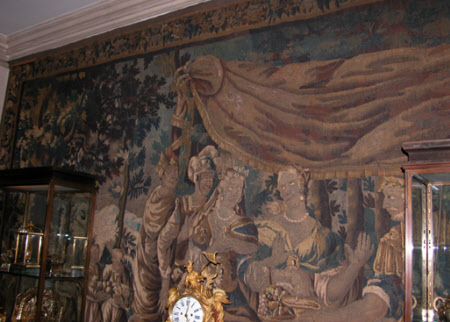 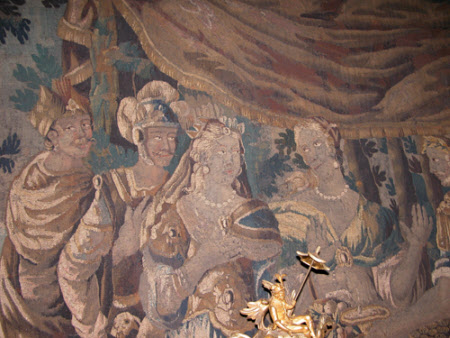 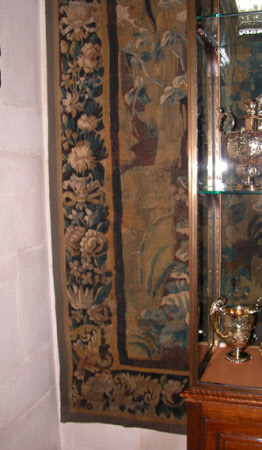 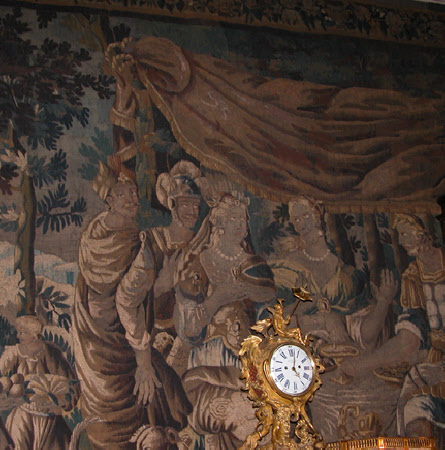 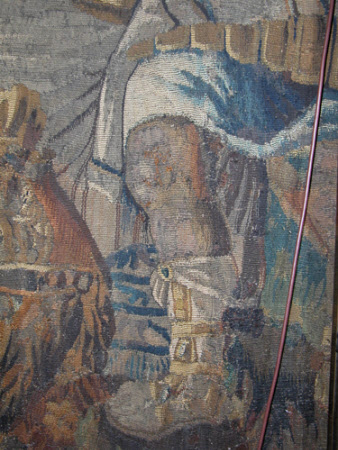 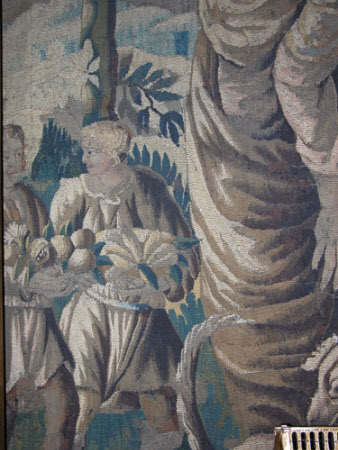 Tapestry, wool and silk, 4 warps per cm, Cleopatra and the Pearl, Aubusson, after a design attributed to Isaac Moillon, c. 1660-1680. In the right foreground a banquet takes place at an outdoor table under a canopy. Cleopatra, on the left of the table, richly dressed in a blue robe, breastplate and jewelled coronet, holds a pearl over a golden goblet on the table. Anthony sits opposite her at the other end of the table, wearing armour and a laurel wreath, and holding the golden goblet. A woman sits at the table between Antony and Cleopatra and two man stand behind Cleopatra. A boy approaches from the right carrying a golden jar, and on the left in the background three more servants approach with platters laden with food. The tapestry has fairly narrow borders with a design of flowers and leaves tied with ribbons on a brown ground.

'Cleopatra and the Pearl' is one of the most famous events in the life of Cleopatra, Queen of Egypt (69 BC – 30 AD) illustrating her extraordinary wealth and extravagance. The story is related in Pliny the Elder's Natural History, book IX, XXXV, lines 119-22. Cleopatra's lover the Roman General Antony daily presented her with precious gifts, but she haughtily disdained them. Antony asked her how he could add to the sumptuousness of their table, and Cleopatra replied that in a single meal she would eat ten million sesterces. Antony did not believe that this could be done, and so they made a bet. The next day Cleopatra served Antony a dinner that was sumptuous but not out of the ordinary, and he mockingly asked how much it had cost, sure that he would win his bet. Cleopatra assured him that this was just an aside, and that she alone would eat the ten million seterces. She ordered the next course to be brought, and following her instructions the attendants placed before her a vase filled with a strong vinegar whose acidity could dissolve pearls. Cleopatra was wearing extraordinary earrings made from great pearls, larger than any known to exist, which she had inherited from Eastern rulers. When Antony asked what she was going to do she detached one of her earrings, plunged it into the liquid and, when it had dissolved, swallowed it. She was about to do the same to the other earring when Plancus, the arbiter of the bet, pronounced Antony beaten. The tapestry shows Cleopatra about to drop the pearl into a goblet of vinegar, watched by the astonished Antony; one of the men standing behind her probably represents Plancus. The tapestry comes from a series of designs of 'Illustrious Women of Antiquity' woven at the French centre of Aubusson in the mid seventeenth century. The series comprised up to nine subjects, the others representing 'Dido', 'Lucretia', 'Valerie', 'Roxanne', 'Portia' and 'Pauline'. Inventories and other records show that this series was sometimes combined with scenes from another, also woven at Aubusson, of 'Illustrious Women of the Old Testament'. Series of illustrious women were very popular in the mid seventeenth century especially in France, with sets of prints published on the subject, a number of painted decorative schemes, as well as tapestry sets. The subject was popular elsewhere in Europe as well, and Anglesey Abbey is home to a tapestry of 'Rebecca' from a series of 'Old Testament Heroines' made in Bruges at around the same time as the Aubusson series (no. 516751). Recently the design of the Aubusson 'Illustrious Women of Antiquity' has been attributed to Isaac Moillon (1614-1673), a Parisian painter who produced a large number of tapestry cartoons for the city. The series can be linked stylistically to Moillon's other tapestry cartoons and the figures of Portia, Dido and Pauline all resemble figures that appear in Moillon's paintings (de Reyniès and Laveissière 2005, p. 280). Tapestries of 'Illustrious women' made in Aubusson are recorded from 1655 onwards, although we cannot be certain that these records relate to Moillon's series. Moillon himself is first recorded in Aubusson in 1650, so it is plausible that he designed the series in the early 1650s. The 'Illustrious Women' remained popular until the mid 1670s (de Reyniès and Laveissière 2005, pp. 281-2). Weavings of 'Cleopatra' survive in the Château d'Ansouis, Provence, and the Château de Torigni-sur Vire, Normandy; others have surfaced on the French art market in the twentieth century (de Reyniès and Laveissière 2005, p. 294). (Helen Wyld, 2011)