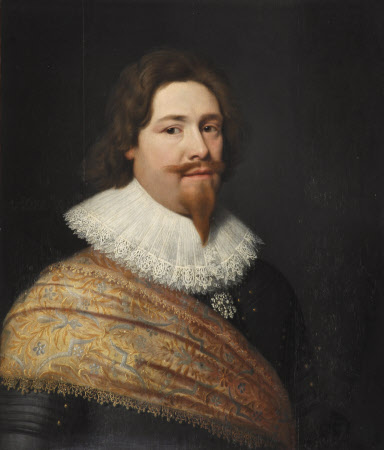 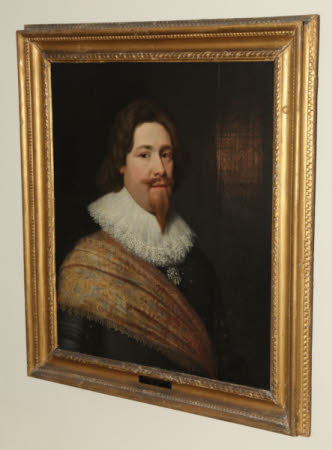 Oil painting on panel, Duke Johann Ernst the Younger of Saxe-Weimar (1594 - 1626) by Michel Miereveldt (1567-1641), signed and dated "A.1623. M.Mierevelt". A head-and-shoulders portrait to right in armour, with a lace ruff and a gold embroidered sash over his right shoulder. He was the eldest son of Johann, Duke of Saxe-Weimar and Dorothea Maria of Anhalt. His father died on 18 July 1605, leaving the duchy under the governance of a regent. In 1608 he began his studies at the age of 14 at the University of Jena accompanied by his younger brothers, Wilhelm and Frederick. In 1613-1614, Johann and his brothers, with his guardians, took a tour of France, Great Britain and the Netherlands as part of their studies. In 1615 Johann Ernst reached adulthood and took control of his duchy and the guardianship of his under-age younger brothers. In 1620 Johann Ernst served under Frederick V, Elector Palatine, the famous Winter King. After his defeat in the Battle of White Mountain on 8 November 1620, the duke refused to submit to the Emperor without conditions. As a punishment, he lost his estates and the guardianship of his brothers. Now fully against the Habsburgs, he fought in the Netherlands and later took a commission as a Danish lieutenant general of the cavalry and fought in the Thirty Years' War in Westphalia and Lower Saxony. Afterwards he went to fight for Count Ernst von Mansfeld for one of his estates in Hungary. There Johann Ernst died, at the age of 32 years, in the Hungarian location of Sankt Martin, as a result of war wounds. The identity of the sitter is secured by Hondius’s engraving of 1630 after a closely related portrait by Miereveldt.

Acquired at the auction of the Craven Collection at Sotheby's in 1968. Accepted by HM Government in lieu of inheritance tax and allocated to the National Trust for display at Ashdown House, 1968.

Ashdown House, The Craven Collection (acquired by HM Treasury and transferred to the National Trust in 1968)