The Creation of Pandora 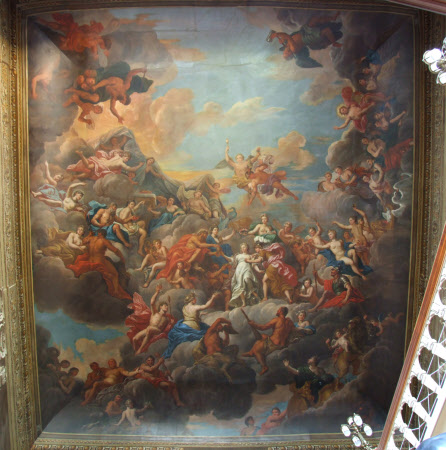 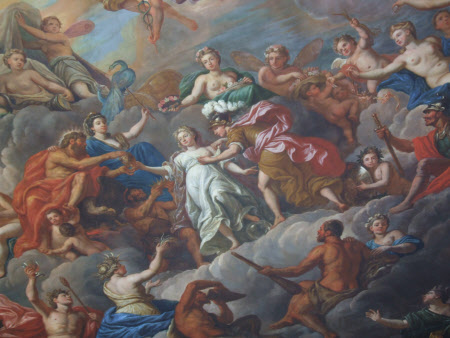 This magnificent painted ceiling is a great example of the art of European painters working in Britain in the early 18th century. It was created by the French decorative artist, Louis Laguerre, who spent most of his career on this side of the channel, initially collaborating with Italian-born Antonio Verrio, who introduced Baroque mural painting to England. Laguerre soon branched out on his own, working for the aristocracy at some of the most important country seats in the country, from Blenheim Palace to Burghley House. This is one of his last and finest schemes, commissioned by Charles Seymour, 6th Duke of Somerset, to decorate the new Grand Staircase at Petworth, after the previous one was destroyed by a disastrous fire in 1714. The principal theme of the wall-painting is the story of Prometheus and Pandora. In classical mythology Prometheus stole fire from the gods and Jupiter punished mankind for the theft by making Pandora open her box, unleashing the world’s evils, with only hope remaining inside. The choice of story is a clear elusion to the fire which prompted the commission.

Oil painting on plaster, The Creation of Pandora by Louis Laguerre (Paris 1663 - London 1721). Pandora appears in the centre in a white dress surrounded by gods and goddesses, some of whom are offering her gifts suitable to their characters. Zeus, or as his Roman counterpart is called Jupiter, hands Pandora the notorious sealed jar containing all the evils of the world and Hope; he is accompanied by Juno/Hera and her peacock. Vulvan/Hephaestus her creator, kneels beside her and offers her a gold coronet. Minerva/Athena who taught and clothed her is adjusting Pandora's dress which is probably her gift, Bacchus/Dionysus presents a goblet of wine, which has just been filled by Ganymede who sits above him holding an ornate pitcher of wine; Ceres/Demeter presents an ear of corn, and a seated Silenus, attended by satyrs and nymphs are bearing her baskets of grapes. Beneath Pandora on two dark clouds are Hercules/Heracles with his club and Pan playing his pipes. Mars offers her his sword, and above him Venus, attended by the Graces, reclines on a cloud on which lies her blue mantle, and offers her cestus. Neptune offers coral from the sea and Cybele wearing a crown of towers is seated in a chariot drawn by lions holds a key in her left hand and raises her right hand in despair. Others in attendance are Apollo with his lyre attended by the Muses; Saturn with a sickle and hour-glass; Diana with her bow. Above Pandora, Flora crowns her with a garland of roses and Mercury/Hermes with his caduceus in his right hand, hovers in the air ready to take Pandora to Epimetheus the brother of Prometheus. Pandora: the name of the first woman on earth. Prometheus created Man by moulding figures out of clay, Athena then breathed life into them. Because of the faults of mortal men Zeus determined to destroy them. He deprived men of fire but Prometheus stole it from Olympus by secretly taking it in the stalk of a fennel plant, and returned it to them. Zeus in revenge caused Vulcan to make the first woman, Pandora, who, by her charms and beauty would bring misery upon the human race. All the gods then bestowed her with gifts to assist her in bringing about the ruin of mankind. Zeus presented her with a sealed jar containing all the evils that were ever to plague mankind. The only good it contained was Hope who was at the bottom. Pandora was delivered by Mercury to Epimetheus who had been warned by his brother Prometheus not to accept gifts from the gods. Epimetheus married Pandora. Pandora having been told not open the jar, did so and released into the world a plague of evils - the last to leave was Hope. Pandora bore Epimetheus a daughter, Pyrrha, who married Deucalion and, with him, survived the Great Flood.