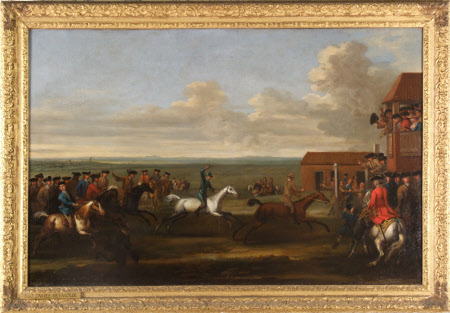 Oil painting on canvas, Horse Race at Newmarket (The Duke of Bolton's 'Bay Bolton' defeating the Duke of Somerset's Grey 'Windham' at Newmarket on either 12th November 1712 or 4th April 1713) by John Wootton (Snitterfield c.1682 – London 1765), 1712 or 1713. A horse-race at Newmarket, with at the centre, a grey, and on the left-hand side a group of horses and a bay. In the right-hand corner can be seen a man in red on a white horse, below the grandstand. Wootton was working for Edward Harley, Earl of Oxford at Newmarket during the period of this painting.

In the collection of the 3rd Earl of Egremont (1751-1837) by 1835; thence by descent, until the death in 1952 of the 3rd Lord Leconfield, who had given Petworth to the National Trust in 1947, and whose nephew and heir, John Wyndham, 6th Lord Leconfield and 1st Lord Egremont (1920-72) arranged for the acceptance of the major portion of the collections at Petworth in lieu of death duties (the first ever such arrangement) in 1956 by H.M.Treasury.

Collins Baker 1920 C.H.Collins Baker, Catalogue of the Petworth Collection of Pictures, in the possession of Lord Leconfield, privately printed by the Medici Society, London, 1920, p.115