Satan calling up his Legions (from John Milton's 'Paradise Lost') 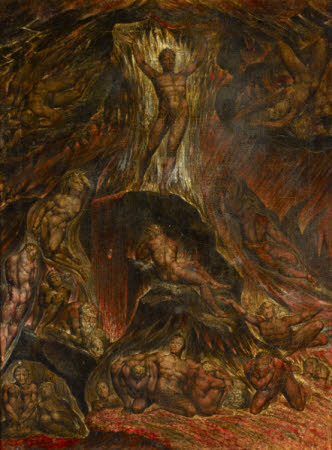 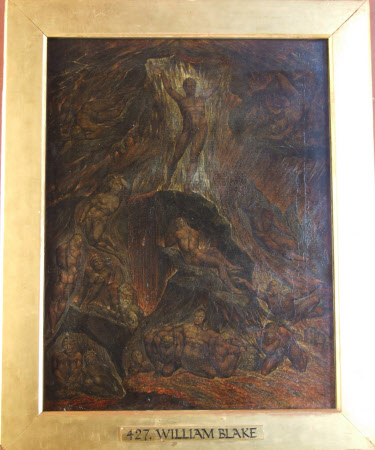 Tempera and gold leaf on canvas

Probably painted c.1800-1805 for the 3rd Earl’s wife, who was an amateur artist, as an experiment in the use of tempera on canvas. Blake described it as ‘largely painted in glazes on top of gold leaf.’ It depicts a scene from John Milton’s Paradise Lost, which was particularly admired by Blake.

Tempera painting on canvas, Satan calling up his Legions (from John Milton's 'Paradise Lost') by William Blake (London 1757 - London 1827), circa 1800-05. Satan stands in the centre, on a rock, backed by flames. Below him, a crowned man is sitting and at left and right figures float in the flames. Below, on a molten rock, the damned can be seen. At centre is a man with scaly thighs, clasping two huddled figures. This painting was made probably for the Countess of Egremont, wife of the 3rd Earl and an amateur artist, as an experiment in the use of tempera on canvas.

Blake treated this subject from John Milton’s 'Paradise Lost' in two differing compositions, one in tempera and the other in watercolour. Each version was repeated in its respective medium, meaning the artist painted 'Satan calling up his Legions' at least four times in total. Petworth’s is the second version of the tempera, the first having been painted in the late 1790s (Victoria & Albert Museum) and exhibited at Blake’s exhibition of 1809. For this, Blake catalogued the painting as 'Satan calling up his Legions, from Milton’s Paradise Lost; a composition for a more perfect Picture, afterward executed for a Lady of high rank. An experiment picture.' The artist’s own description of the first version, therefore, reveals that it was among several exploratory efforts in tempera, used in an attempt to defy oil painting – which he defined as 'that infernal machine' in the same entry – hence its subsequently deteriorated state in comparison the present work. Blake’s own words also clearly identify the more refined Petworth version as a commission from Elizabeth Ilive, Countess of Egremont. The painting could have been done during Blake’s Sussex years or, if not, soon after. The subject is one which was also tackled by others of Blake’s generation, such as John Robert Cozens (Tate) and Thomas Lawrence (Royal Academy). At Petworth, the 3rd Earl of Egremont requested a major marble carving representing a 'capital figure of Satan, with something of his original brightness' from the sculptor Francis Chantrey around 1819.18 While this was abandoned, the subject was eventually delivered by John Flaxman in the form of 'St Michael triumphing over Satan', finished in 1826 (NT 486401). Egremont’s desire for this subject could, at least in part, have been inspired by his knowledge of the Blake, which he ultimately appears to have repossessed from his deceased wife in 1822. The painting evokes the opening book of 'Paradise Lost', in which the anti-hero Satan rallies the rebel angels, who have been cast out by God and sent to Hell, with a view to re-entering Heaven by force. Blake’s image conflates several passages from Milton’s text in terms of incidents, characters and landscape imagery. Standing at the centre is Satan 'who stood and called His legions'. Beneath him sits Beelzebub, who takes 'Satan except, none higher seat', a position which in Blake’s composition is located at the top of the 'hill not far whose grisly top belched fire'. In this region of Milton’s inferno, gold spews forth and is sought after by 'a numerous brigade' headed by the figure of Mammon 'always downward bent', perhaps alluded to by Blake in the grovelling figure at the bottom right of his picture. Blake’s use of gold leaf as a base layer for the tempera versions of this subject also potentially had a symbolic purpose in this context. Meanwhile, the scaly figure seated at the centre of the bottom row of characters may be intended to represent Dagon, 'upward man and downward fish'. Text adapted from William Blake in Sussex: Visions of Albion, ed. Andrew Loukes, National Trust in association with Paul Holberton Publishing, 2018, p.93.

Painted before 1809 for Elizabeth Iliffe, Countess of Egremont (d.1822) thence by descent, until the death in 1952 of the 3rd Lord Leconfield, who had given Petworth to the National Trust in 1947, and whose nephew and heir, John Wyndham, 6th Lord Leconfield and 1st Lord Egremont (1920-72) arranged for the acceptance of the major portion of the collections at Petworth in lieu of death duties (the first ever such arrangement) in 1956 by HM Treasury

...Blake.... (with illegible letters or figures before and after