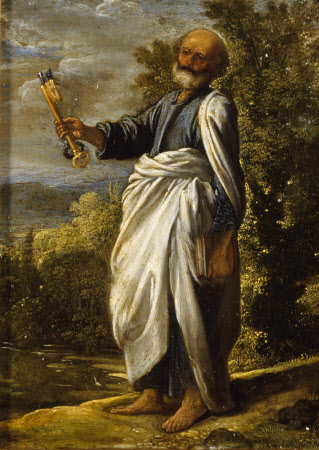 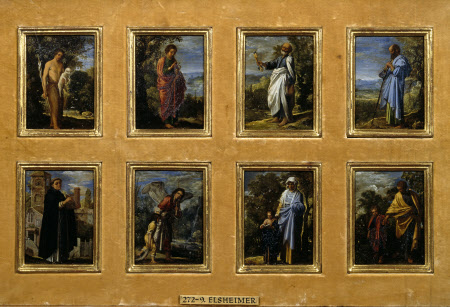 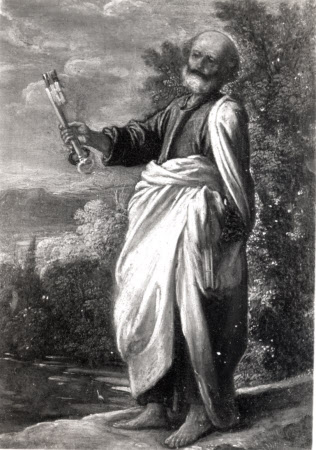 This is one of a set of small religious scenes at Petworth, comprising of eight subjects. Originally there may have been additional figures, including, it is generally supposed, a Saint Lawrence (Fabre Museum, Montpellier) and a Sacrifice of Isaac. The same series of ten subjects is repeated in copies, in the style of Cornelis van Poelenburgh (Palazzo Pitti, Florence). The original purpose of these pictures may have been the decoration of a piece of furniture. A set of paintings similar in composition but of mediocre standard, is used for the purpose of embellishing the drawers of a Dutch 17th century cabinet at Penshurst. The Petworth pictures were bought by the 10th Earl of Northumberland in 1645, from the famous collection of the 1st Duke of Buckingham, and were placed in individual Rococo frames by Joseph Duffour in 1752. Elsheimer was a great friend of Rubens, and also influenced him stylistically.

Oil painting on silvered copper, Saint Peter by Adam Elsheimer (Frankfurt am Main 1578 – Rome 1610). One of eight small paintings by Adam Elsheimer. Saint Peter, is shown full-length, turned slightly to the left and facing. He is barefoot and wearing a white robe over a blue dress and holding aloft two keys in his right hand, his attribute as entrance keeper to heaven. The background is of a woodland landscape with a cloudy sky to the left.

First recorded as being in the collection of the 1st Duke of Buckingham (1592-1628) at York House at his death in 1635. York House was subsequently rented by the 10th Earl of Northumberland who made a deal with Parliament to have some of the compensation owed to him in reimbursement for his losses during the Civil War indicating that he would be prepared to accept 'some of the smaller Pictures in consideration of that money'. The Elseimers were the greatest prize, valued at £250, and were at Northumberland House on 30 June 1671.Thence passed by marriage in 1682 of Lady Elizabeth Percy (the Percy heiress) to the 6th Duke of Somerset (1662-1748) then to the 7th Duke of Somerset (1684-1750). Thence to his nephew, Charles Wyndham, 2nd Earl of Egremont (1710-1763) on the division of the collection between him and the 7th Duke's son-in-law, Sir Hugh Smithson, later 1st Duke of Northumberland (1714-1776). At Egremont House in Piccadilly in 1764, and at Petworth in 1799. Thence by descent, until the death in 1952 of the 3rd Lord Leconfield, who had given Petworth to the National Trust in 1947, and whose nephew and heir, John Wyndham, 6th Lord Leconfield and 1st Lord Egremont (1920-72) arranged for the acceptance of the major portion of the collections at Petworth in lieu of death duties (the first ever such arrangement) in 1956 by H.M.Treasury.