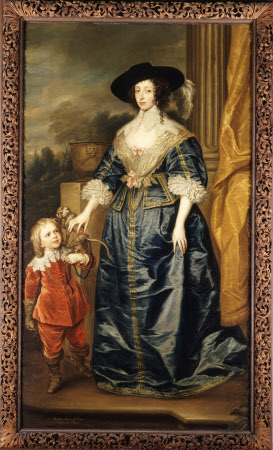 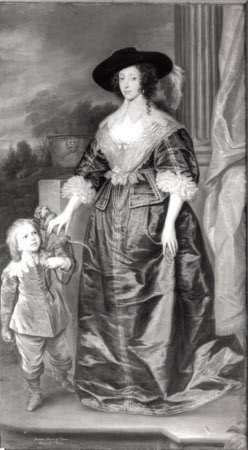 Oil painting on canvas, Queen Henrietta Maria (1609-1669) and Sir Jeffrey Hudson (1619-1682) (after Van Dyck) by Charles Jervas (Dublin 1675 – London 1739). Full-length portraits, standing, full face, the Queen is wearing a large black hat and deep blue silk dress. Hudson on the left dressed in rose-scarlet with a monkey on his shoulder with a pillar and golden curtains at right, and sky and trees at left in the background. The apparent original of 1633 is in the National Gallery of Art, Washington.

Possibly the picture confusingly called (as she was called at the Restoration): The Queen Mother. Ditto [= whole length] with Godfrey the Dwarf. Ditto [= ‘Jarvis’],which was lot 56 in ‘Mr Hampden’s’ sale in 1754 (Houlditch, vol. I, pp.446-47), in which it was paired with a portrait of: “King Charles Ist whole length, in Greenwich Park, and his Page”, and in a sale with quantities of other Jervas copies and portraits (which may have come through one of the obscurer sitters, Martin Baldwyn, because it is hard to see why otherwise there should have been two portraits of him). Sir Charles Wyndham, 2nd Earl of Egremont (1710-1763) was buying heavily through sales at this period, and though the sale is not recorded in his pocket-book, and no buyer’s names are recorded by Houlditch, there is at least a possibility that this is how it got to Petworth - especially since Jervas was not an artist otherwise employed there; in the collection of the 2nd Earl of Egremont (1710-1763) at the time of his death and thence by descent, until the death in 1952 of the 3rd Lord Leconfield, who had given Petworth to the National Trust in 1947, and whose nephew and heir, John Wyndham, 6th Lord Leconfield and 1st Lord Egremont (1920-72) arranged for the acceptance of the major portion of the collections at Petworth in lieu of death duties (the first ever such arrangement) in 1956 by HM Treasury.