A Perspective View of the Courtyard of a House 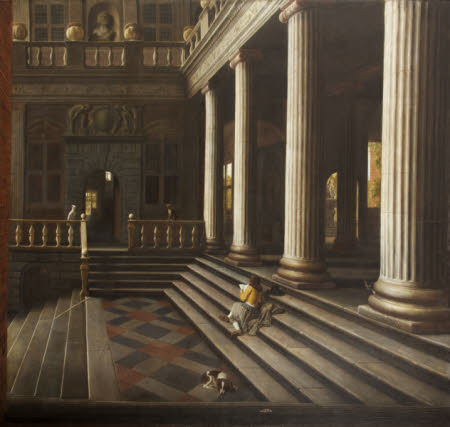 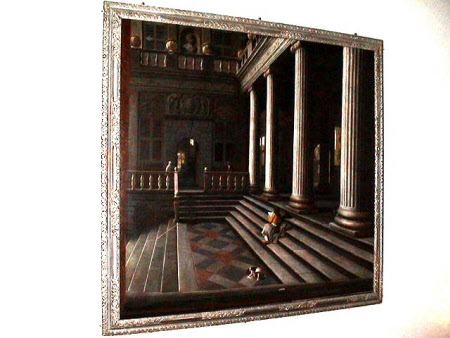 This large painting is thought to be the 'Great Perspective' purchased by William I Blathwayt (?1649–1717) from his uncle Thomas Povey (1613/14–c.1705) in the 1690s. Povey had an important collection of pictures that had been admired by the diarists Samuel Pepys and John Evelyn. Blathwayt bought many paintings from Povey in the 1690s, when he was seeking to form a collection at Dyrham Park, the property he had acquired through his marriage to Mary Wynter in 1686 and was in the process of transforming. In December 1700, Blathwayt’s nephew and clerk, John Povey, recorded how difficult it had been to find an appropriate place to hang the 'Great Perspective', and reported that 'there is a Necessity of placing it in one side of the Best Stair Case where after all by the Elevation and the proper placing of it it promises a Wonderfull Effect.'

Oil painting on canvas, A Perspective View of the Courtyard of a House, by Samuel van Hoogstraten (Dordrecht 1627 – Dordrecht 1678), signed at the bottom, as if incised in the stone: S. V. H. / 1664 (?). The painting depicts an imposing courtyard, with steps leading down from an Ionic colonnade at the right. Seated on the steps is a boy with his back to the spectator, dressed in a yellow doublet, reading a paper. In the foreground a spaniel lies asleep. Beyond the colonnade a garden is glimpsed through doorways with a fountain with putto. On the balustrade in the left foreground is a cockatoo. The sculptural figures forming the pediment above the rusticated doorway could represent the old and new year, or summer and winter, and the bust after the antique set into a niche on the facade of the piano nobile looks like that of a Roman emperor or Seneca.

Thought to have been purchased by William I Blathwayt from Thomas Povey around 1693; thence by descent; Indigenous collection purchased by Ministry of Works in 1956 and given to Dyrham Park in 1961