Two Evangelists (Saint John the Evangelist, the Author of a Gospel and possibly Saint Luke) (predella) 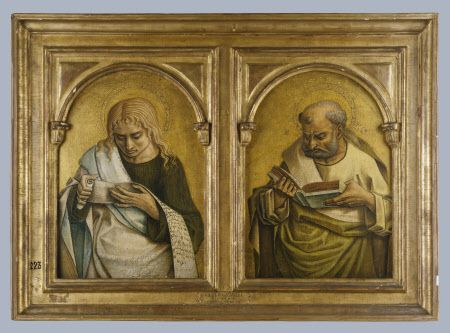 Tempera and oil on panel (poplar)

These panels once formed part of the predella (the lower tier), of an altarpiece made for the church of the Frati Conventuali di San Francesco at Montefiore dell’Aso, near Fermo, in the Marches, Italy. The altarpiece was composed of eleven parts altogether, with eight predella panels, and a triptych above. It remained in the church until the early nineteenth century, when it was dismantled, each part spread across Europe and America. The central panel was a ‘Pietà’, which is now in the National Gallery, London. According to the traditional iconography of predellas such as this, the figure of Christ would have been at the centre, flanked by Saints Peter and Paul, as the twin founders of the Christian Church. It has been suggested that two pairs of Evangelists were placed at the outer edges.

Tempera with oil painting and gilding on poplar panel (square at base with rounded tops; framed together to form a single rectangular panel, presumably on entering the Bearsted collection; fillets added at the bottom of each panel in 1999), Two Evangelists (Saint John the Evangelist and the Author of a Gospel and, possibly, Saint Luke) by Carlo Crivelli (Venice c.1430 – Ascoli Piceno 1495) and Workshop, circa 1471-1473. The two half-length figures are framed together. The young man on the left, almost facing the spectator, wearing an olive-green robe with blue and white (originally pink) cloak, is reading from a scroll; the elderly man on the right, reading a book, wears a white robe and green cloak and faces slightly to the left; gold backgrounds (re-gilt). The rectangular panels with painted surfaces forming arched tops, with gesso and priming in spandrels; additions or joins 2 inches (51 mm) from bottom.

Almost certainly commissioned by the Frati Conventuali for their church of San Francesco at Montefiore dell’Aso, near Fermo in the Marches, where the altarpiece remained until the early nineteenth century when it was dismantled (see Related object); next recorded with the Roman dealer Cav. P. Vallati in 1858 (‘The Travel Diaries of Otto Mündler 1855-1858’, Walpole Society LI (1985), p.233 & manuscript notes of Charles Eastlake [National Gallery library] who also notes their provenance from Montefiore, presumably on Vallati’s authority; quoted in Martin Davies, from whom bought by Lieutenant Colonel G Cornwall Legh of High Legh Hall, Knutsford, Cheshire, c.1860; with Knoedler & Co. in 1922, from whom bought by the 2nd Viscount Bearsted in July 1922 for £1,000; given with Upton House to the National Trust by Walter Samuel, 2nd Viscount Bearsted (1882 – 1948), in 1948, shortly before his death