The Nativity at Night 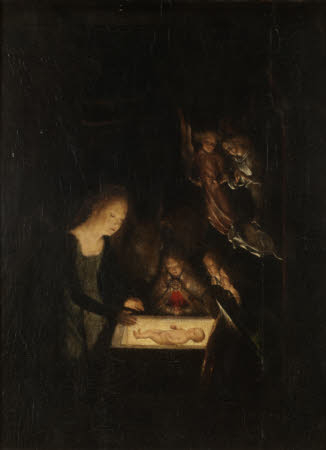 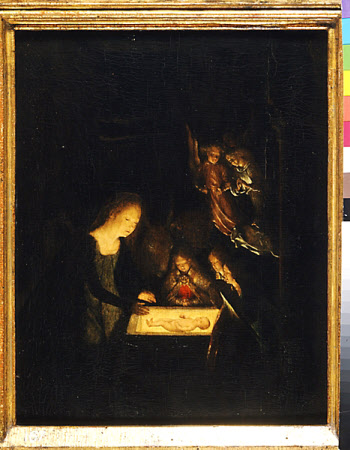 Oil painting on oak panel, The Nativity at Night, attributed to Michel Sittow (Tallinn c.1468 – Tallinn 1525/6). The Virgin kneels at the left of the Child who lies in a crib in the centre; opposite her, surrounding the cradle, are four angels praying, while three others hover above; in the background the ox and ass, and to the left Saint Joseph. Light streams from the Child, but the greater part of the composition is left in shadow.

Lying in a manger, the Christ Child is adored by the kneeling Virgin, four angels and a donkey. Two angels hover at the upper right. The painting has darkened to such a degree that the figure of Joseph is no longer visible at the far left although his presence is noted in earlier publications. The Nativity is depicted as a nocturne with the body of Christ as the sole source of illumination. The textual source for this image is to be found in the writings of the fourteenth-century mystic Saint Bridget of Sweden. In her vision of Christ’s birth, which takes place at midnight in Bethlehem, a divine radiance (splendour divinus) emanated from the new-born Christ, casting a warm glow upon the faces of Mary and the angles. This picture has been attributed to Michel Sittow since 1931. It is generally accepted that the composition reflects the legacy of two lost nocturnal Nativities by Hugo van der Goes. Similar paintings in the Kunsthistorisches Museum, Vienne, the Philadelphia Museum of Art and the Church of Saint Anne, Annaberg, have also been attributed to Sittow. These paintings are distinguished by the presence of Joseph who stands with his hand covering a candle. The candle’s meagre glow is overwhelmed by the light generated by Christ. Matthias Weniger and others consider none of these to be autograph works by Sittow, but Weniger praises the Upton House version for its fresh and lively colour. The composition was popular with any number of Netherlandish artists including for example Jan de Beer (and also in Germany in the work of the Lower Rhenish artist Jan Joes and his pupil Bartholomæus Bruyn the Elder. Text adapted from John Oliver Hand's catalogue entry for Michel Sittow: Estonian Painter at the Courts of Renaissance Europe, New Haven: Yale University Press, 2018, p. 102-4.