Judas Maccabaeus praying for the Dead (after Rubens) 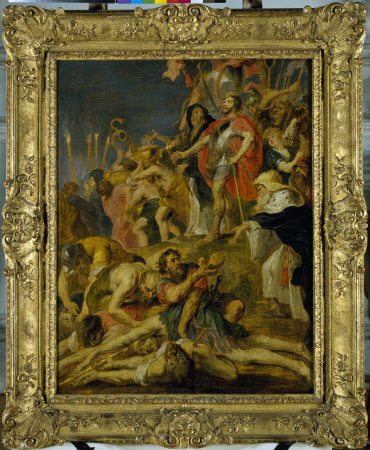 The story is taken from II Maccabees (xii, 39-42), when on the day after the Sabbath, following their victory over the men of Gorgias, the Jews go to bury their dead and pray for them. They realise the cause of their comrade’s deaths when they discover on their corpses the stolen idols of the Jamnites, forbidden to the Jews. Judas Maccabeus nonetheless made a collection of silver to send to Jerusalem as a ‘sin offering’ on behalf of the dead “that they might be delivered from sin.” In the Counter-Reformation, this was regarded as a prefiguration of Christian forgiveness, and of the speeding of the release of souls from Purgatory through prayer and pious offerings. It has been suggested that this picture was copied after a lost ‘modello’ (model) for the Rubens’s altarpiece commissioned by Maximilien Vilain, Bishop of Tournai, for the altar of the Souls of Purgatory in Tournai Cathedral.

Oil painting on canvas, Judas Maccabaeus praying for the Dead by Victor Wolfvoet II (Antwerp 1612- Antwerp 1652), after a hypothetical sketch by Sir Peter Paul Rubens (1577-1640) for the altarpiece. In the background a victory procession passes to the left. Judas Maccabaeus, wearing armour and a red cloak, stands on a mound in the centre, apparently praying, while a priest summons him to join the procession. In the foreground the idols are found on the dead and a Jew hands a gold object to a priest. It illustrates an episode from the apocryphal biblical book of II Maccabees 12:39–48 in which Judah's troops found stolen idolatrous charms on the corpses of Jewish warriors slain on the battlefield. He therefore offered prayers and an expiatory sacrifice for these warriors who had died in a state of sin. During the Counter-Reformation the passage was used by Catholics against Protestants in order to justify the doctrine of purgatory. Rubens was commissioned to paint the scene for the Chapel of the Dead in Tournai Cathedral in 1634 and having been looted by French revolutionary forces in 1794 is now in the Musée des Beaux-Arts de Nantes, Nantes (inv. no. 429; D.804.11.P).