An Unknown Man in Prayer 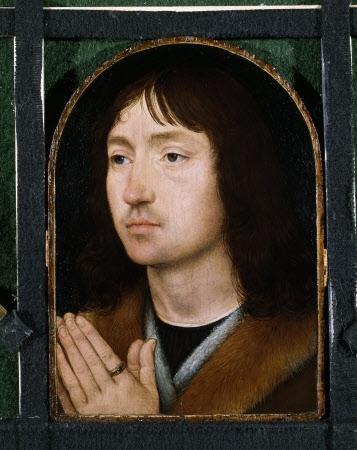 This portrait probably formed the right wing of a diptych. The left-hand side would have been a devotional image, probably a Madonna and Child. Memling was a German-born painter, often stylistically associated with the Early Netherlandish artists.

Oil painting on panel, An Unknown Man in Prayer by Hans Memling (Seligenstadt 1430/40 – Bruges 1494), circa 1485/90. A young man, head and shoulders, facing half left, with long dark hair, hands joined in prayer; he wears a brown cloak with a large fur collar over a black doublet with a white shirt visible at the neck; a ring on the index finger of the left hand. This is likely to be the right wing of a diptych, the companion of which was the Madonna and Child.