The Madonna and Child with Two Music-making Angels 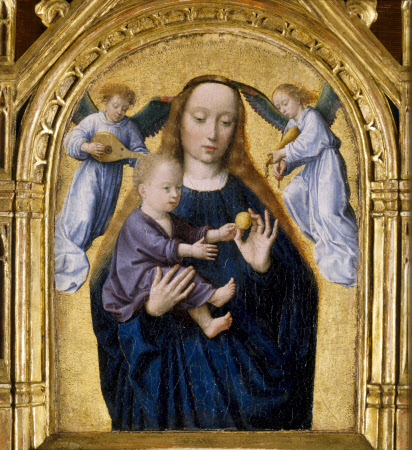 Oil painting on oak panel, The Madonna and Child with Two Music-making Angels, by Gerard David (Oudewater 1460 – Bruges 1523), circa 1500. The Madonna, half length, wearing a blue robe and crown, holds the fair-haired Child, in a pale mauve robe, on her right arm, and with the other hand offers Him an apple. Two angels, in pale blue robes, hover with out-stretched wings on either side, playing musical instruments and looking down upon the Child. The panel is one half of a diptych which would have opened up like a book to be used for personal prayer. The pendant is Christ Taking Leave of His Mother in the Metropolitan Museum of Art, New York (acc.no. 14.40.636). Of equivalent size, both panels bear the same gold ground with stippling and feathered strokes at the upper arced edge and trompe-l'oeil porphyry painted on the reverse.

First noted by Max Friedländer in 1928, the present picture is the left half of a diptych, the other half being the panel in the Metropolitan Museum of Art, New York, showing Christ taking leave of his Mother, which had also once belonged to Otto Kahn (acc.no. 14.40.636). Although this was at one time disputed – on account of the figures in the New York panel being disproportionately large, thematically disjointed, and that the two panels are differently framed – other diptychs by Gerard David (see below) show figures of similar scale, and neither frame is original (the Upton House frame and picture are not, as pointed out by St. John Gore in 1964, formed of one piece of wood). Both panels, as the art historian Maryan Ainsworth notes, have matching gilt backgrounds, decorated with remnants of stippled and feathered strokes emanating from the holy figures, and the reverse of both panels has been painted to simulate porphyry (unfortunately this paint layer on the Upton House panel was not sufficiently well-preserved to be uncovered during conservation). Two other diptychs by David depict similar subjects. The one in the Alte Pinakothek, Munich, shows the Virgin and Child minus angels, with the Christ Child embracing his Mother rather than reaching out for the apple (inv.no. 1080). The subsidiary figures of Mary Magdalene and Martha are omitted from the right-hand panel (inv.no. 1079). The other diptych, of a similar date (circa 1490s), in the Öffentliche Kunstsammlung, Basel (G 1958.15 and G 1958.16), is similar to the Munich, with the exception of the addition of music-playing angels accompanying the Virgin and Child. It has been suggested that the subject matter of the diptych was based on the Meditations on the Life of Christ, written by a Franciscan friar known as the Pseudo-Bonaventure. The text urges the reader to contemplate the stages of Christ’s life. However, there is no passage that describes the Virgin offering the Christ Child an apple (an allusion to Christ as Redeemer), and it seems more probable that the Upton panel was inspired by Eastern icons, which were at the time popular with the Dukes of Burgundy. The pouncing (a method of transferring a preparatory drawing for a painting from paper to another surface, such as canvas or plaster) revealed by infra-red analysis suggests that the image had a wide appeal – thus necessitating the quick reproduction of the ‘type’. As in the Basel version, the Upton House Virgin and Child are accompanied by music-making angels. The lute and the viol, on which they play, were traditional accompaniments to liturgy (see R. Strohm, Music in Late Medieval Bruges, Oxford, 1985, pp.81–2). In this way, the process of contemplation might be assisted by imaginings of heavenly music. The small size of the diptych suggests that it was a portable piece, possibly used as a devotional aid on journeys. It would have been a ‘luxury good’, its illusionistic painted porphyry exterior giving the impression of a sumptuous casket.