The Adoration of the Magi (Triptych) and Christ before Pilate (Verso) 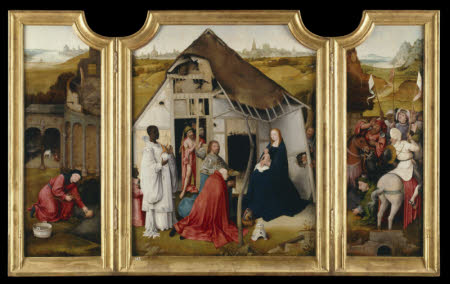 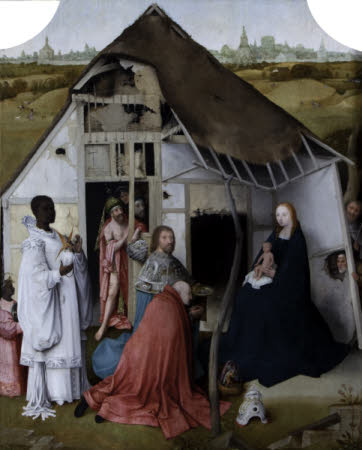 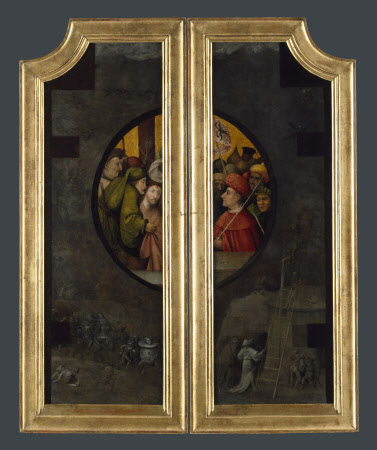 Oil painting on oak panel, The Adoration of the Magi (Triptych) and Christ before Pilate (verso), attributed to Hieronymus Bosch ('s-Hertogenbosch, Brabant c. 1450 - 's-Hertogenbosch 1516), circa 1495 - 1500. Central panel: the Adoration of the Magi, with the Virgin Mary and Christ Child seated at right, being presented with gifts by the Three Magi outside a dilapidated stable, with hills, a river, and city in the distance. The eldest Magus, traditionally identified as Caspar, is cloaked in red and kneels at the feet of the Virgin, having presented the gift of a golden sculpture (the subject unidentified). His crown can be seen in the foreground. The second Magus, wearing a blue cloak and traditionally identified as Melchior, stands beside the kneeling Magus, his jewelled mantle decorated with scenes showing the Queen of Sheba before Solomon (a prototype of the Adoration). He offers the gift of frankincense on a golden dish. The third Magus, Balthasar, wears a white tasselled dalmatic with thistle-leaf motif, and carries an spherical casket decorated with a relief of the Offer of Water to David (another prototype of the Adoration). Within the casket is the gift of myrrh. He is accompanied by an attendant wearing red. Observing the Virgin and Child from the doorway of the stable is a semi-nude man traditionally identified as the Antichrist, surrounded by followers. He wears a translucent tunic and red drapery, gold chains and shackles, and a turban encased with metal thorns. At the crown is a small glass vessel containing a blossoming twig. The Antichrist appears to hold Melchior's headdress. An owl, a lizard, a small bird and a sheaf of wheat are visible in the stable's rafters. Within the stable an ass rests, framed by the adjacent doorway and almost entirely obscured by darkness. Shepherds peer through a hole in the stable wall. Right wing: The mounted retinue of kings, carrying three lances with pennants, in a landscape with a conduit in the foreground. They look upwards as if towards the Star of Bethlehem (not visible in the picture) while one of them kneels on the ground handling what appears to be a large portfolio. Left wing: Joseph kneels in the foreground gathering sticks and water, the Christ Child's bath tub beside him; behind him is a ruined palace, with a table, bench and fire visible through an arcade, and the half-length statue of a prophet above the central column. Pentimenti is visible along the left edge of the stable roof, in the circular tower of the palace, and in the form of a building in the landscape. Verso: When closed the wings display a central lozenge-shaped roundel with Christ before Pilate after the Flagellation. Christ, wearing a robe and crown of thorns, is seen half-length on the left, handled by the executioners, with Pilate opposite him surrounded by heads in turbans and helmets; two of these seem to correspond with figures in the doorway of the stable in the centre panel. The surrounding areas are painted in grisaille and show a scene with demons flying in the air and a procession of fantastical figures, some mounted, hurrying along the ground to the left, where a gallows beset with demons is erected beside a cylindrical building. Infrared reflectography revealed that a pair of donor figures were at the rear of the verso before being painted over. Earlier versions of the Adoration of the Magi by Hieronymus Bosch are at the Metropolitan Museum of Art (acc.no. 13.26) and the Philadelphia Museum of Art (acc.no. 1321). The central panel of the present picture is a variant of that contained within the triptych at the Prado, Madrid (acc.no. P002048). There are several other copies of the centrepiece, including: Philadelphia Museum of Art (acc.no. 354) and Petworth House (NT 486154); see Friedländer 1969, vol.V, p. 82, no. 68 and de Tolnay 1937, p.99, no.31.