A Magus at a Table 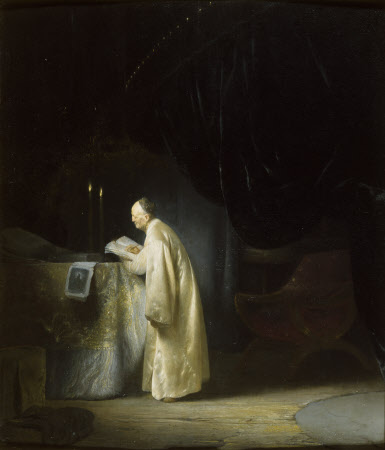 This painting by Jan Lievens depicts a priest, or magus, standing before a table. Artefacts such as a skull cap and books suggest that he is a scholar, but the gold gown and gold brocade are unusually opulent. The strange canopy of green fronds and the circular insertion in the floor suggest overtones of magic or alchemy, which is why the term ‘magus’ has been used in its current title. The painting was once thought to be one of a number of copies, made after a lost original produced by Lievens in 1630. One of these copies was listed in the inventory taken of Rembrandt’s possessions in 1656, where it was described as 'One priest after Jan Lievens'. Dendrochronology (tree-ring analysis), undertaken in 1983, had suggested that board on which the Upton version is painted dates from after 1660. However, in recent years, the accuracy of this dating has been questioned, and it is now thought that the work is not a later copy, but is in fact an autograph work by Lievens, painted in 1631/2.

Oil painting on oak panel, A Magus at a Table, by Jan Lievens (Leyden 1607 - Amsterdam 1674), circa 1631, signed and dated on parcel, bottom left: Rembrandt f. 16 . . [last two numerals indistinct], a false signature. A priest stands in a darkened room before an altar, wearing a golden robe and writing in a book which he supports on his left forearm. On the altar table, covered by gold cloth, a large volume rests on a folio of engravings, the impression hanging over the edge of the altar appears to show a bust-length figure, facing, with an aureole of light emanating from the head. In the background a chair is placed beneath heavy folds of dark-green curtain; the scene is lit by two candles placed on the altar.

According to H. de Groot, the picture was in a sale at Amsterdam, 7 Sept. 1803, lot 139 (Schmidt sale), and probably in the van Roothaan sale, Amsterdam, 29 March 1826, lot 52, as by Lievens; possibly lot 93 in William Seguier's posthumous sale at Christie's, 4 May 1844 as 'Rembrandt. A Jewish Priest in his robes, standing before a table'. [bought by Yates]; included in the sale of the late Miss Maria Chippindall of Croftlands, Lancs., Christie's, 28 May 1903, lot 154; bought by Nicholson (H. de Groot, who omits the Chippindall provenance, gives the ownership of T. Humphrey Ward and J. Walter of Bearwood); Arthur Walter of Bearwood; his sale, Christie's, 18 June 1937, lot 84, repd. (giving provenance from Miss Chippindall, but making no mention of T.H. Ward or J. Walter); bought by 'Barnes', for 2,730 ('Barnes' was probably the name of the clerk acting for Lord Bearsted at the sales (cf. the Duyster and Rembrandt's Father's Mill'. A note in the clerk's copy of the catalogue in Christie's archive puts 'Bodkin' [?Sir Thomas Bodkin] alongside as the underbidder.), since Christie's forwarded to the latter a letter from François de Pulaski of the Polish Library in Paris, asking for details of the picture [Pulaski himself owned a version of it].