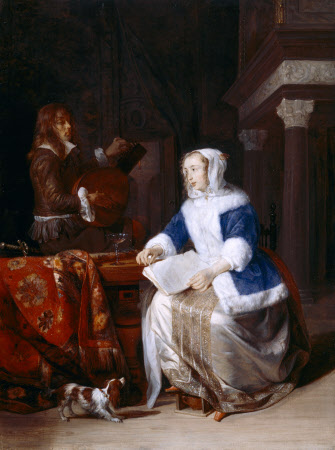 Oil painting on oak panel, The Duet ('Le corset bleu'), Gabriel Metsu (Leyden 1629 - Amsterdam 1667) c.1660, signed at the bottom of the sheet of music: G. Metsu. A cabinet picture depicting a young woman wearing a blue velvet jacket edged with ermine and a white satin skirt trimmed with gold braid, sitting beside a table which is partly covered by a carpet. She holds a musical score on her lap and turns to look at a young man who sits on the table tuning his lute, an instrument of love. A glass of wine stands between them, to the right is a large chimney-piece supported on columns, and in the foreground a small dog.