A Child holding a Dog 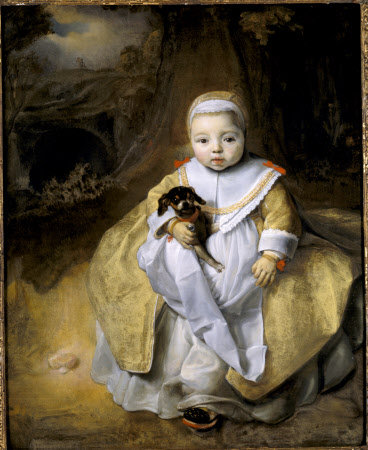 Although this shimmering picture of a charming toddler and pet dog, set in a landscape, has not always been ascribed to the same artist, including once being attributed to Jacob Gerritsz. Cuyp, a Dordrecht artist who specialised in individual child portraiture, it has the poignancy of Rembrandt’s assistant, Govaert Flinck. He also studied with Bartholomeus van der Helst in Amsterdam and created several depictions of children, including a similar little girl, in an interior, signed and dated 1640, now in the Mauritshuis, The Hague

Oil painting on canvas, A Child holding a Dog, by Govert Teunisz. Flinck (1615-1660), circa 1640-42. A little girl aged about three is seated on a bank by a tree, facing the spectator; she wears a yellow coat and a white apron over a white dress, lace cap, white cuffs and a large white collar with red bows at her wrists and shoulders, and holds a small black and tan dog, with a red collar and bell, under her right arm; a landscape view left.