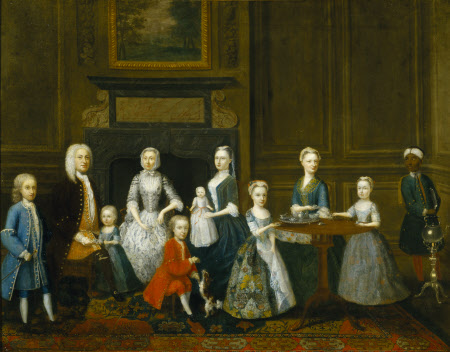 Oil painting on canvas, Thomas Smith (1699/1700-1744), his Family and an Unidentified Attendant by Robert West (fl.1735 - d. Dublin 1770), signed and dated, in calligraphic script, bottom right: R. West fecit 1733. A group of full-length portraits in a panelled room with Thomas Smith seated left before a fireplace with his three sons round him; his wife stands at his left, wearing an embroidered dress, next to her is her eldest daughter, holding a baby and, at the right, at a circular tripod table are three girls, the eldest of whom is pouring out tea; an attendant stands at the extreme right with a kettle on a tripod stand. Little is known of Thomas Smith, but it is thought that he was French in origin and his original name was Le Fevre. We similarly know little about the artist, Robert West, except that he trained under Carle van Loo in Paris, and that in 1746 he established a drawing school in Dublin. He was renowned primarily for his red chalk drawings. Note on the Unidentified Attendant: It is not known if the attendant, who is of African descent, was included by the artist as a trope or as a portrait of a real individual.

A damaged typed sheet of paper formerly attached to the back of the canvas claims that the picture was painted at Hadley, Middlesex, in 1735, and that it descended to Louisa Smith, one of the two daughters of Thomas Smith of Evesham, the son of the first Thomas Smith’s eldest son, John Smith. It is not known when it was acquired by the 2nd Viscount Bearsted, but the detailed typescript suggests that it was via a sale by private treaty; given with Upton House to the National Trust by Walter Samuel, 2nd Viscount Bearsted (1882 – 1948), in 1948, shortly before his death.