Two Couples of Foxhounds in a Park Landscape with two Terriers 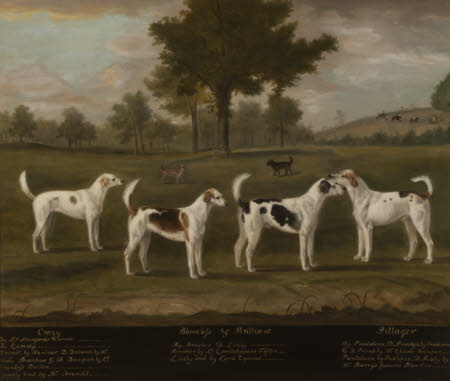 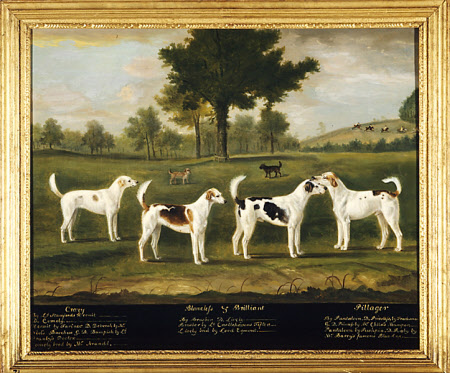 The names and pedigrees of the four hounds have been inscribed in the black panel below the picture itself. The dogs all have captivating names: Crazy, Blameless, Brilliant and Pillager. They all doubtless feature in Sartorius’s painting of the whole pack, which belonged to Peter Beckford, which is also at Upton House. Peter Beckford was a cousin of William Beckford, the famous collector (whose portrait by Romney is also at Upton House). He was the first English writer to describe the science of hunting, and he is perhaps best known for his ‘Thoughts on Hunting’, published in 1781. It is said that he “would bag a fox in Greek, find a hare in Latin, inspect his kennels in Italian, and direct the economy of his stables in exquisite French.”

Oil painting on canvas, Two Couples of Foxhounds in a Park Landscape, by Francis Sartorius (London 1734 - London 1804), 1785. Inscribed with names and pedigrees of the four hounds in panel below; Crazy, Blameless, Brilliant, Pillager.