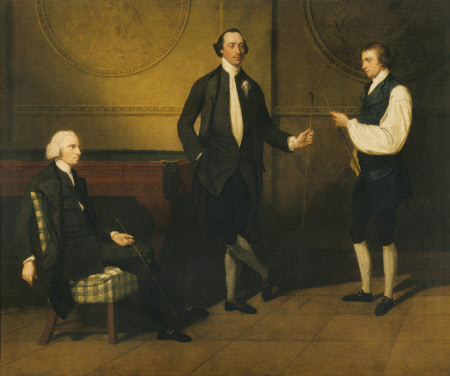 The Reverend Charles Everard, shown seated, was Rector of various churches and Prebendary of York and Sarum. His mother was the daughter of Lawrence Booth of Twemlow, Cheshire, through whom he succeeded to Twemlow and assumed the names and arms of Booth. He married, but died without children. Little is otherwise known about the Reverend, and as such, the scene is not identifiable. The players are seen using the mace, which was superseded by the cue soon after 1800.

Oil painting on canvas, Reverend Charles Everard Booth DD (c.1726-1792), Capain Griffith Booth, RN, and an Unidentified Man playing Billiards by John Hamilton Mortimer ARA (Eastbourne 1740 - London 1779). The interior of a classical room with, left, the Reverend Charles Everard Booth in dark clothes seated, holding a mace in his left hand and resting his right arm on the back of a chair; next to him stands a younger man who leans against the billiard table, his legs crossed, a mace in his left hand, turning towards a man who stands at the right, in shirtsleeves and blue waistcoat.

E.L. 1893 (label attached to the back of the picture signed)