The Four Times of Day: Night 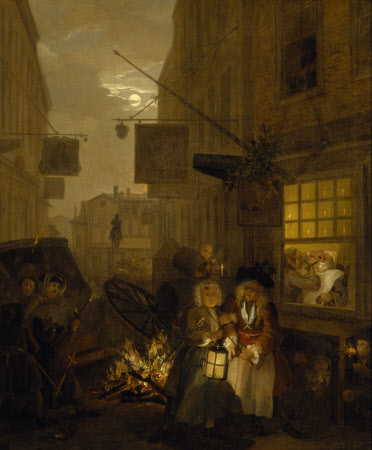 This picture is part of a set of four, entitled ‘The Four Times of Day’. ‘Morning’ is also at Upton House. The pictures were intended as the models for engravings. This moonlit scene is set in a narrow lane leading from Whitehall to Charing Cross. The equestrian statue of Charles I by Hubert Le Sueur can be seen in the distance. Bonfires have been lit in celebration of Restoration Day, or Oak Apple Day (29th May), which marked the Restoration of the Stuart dynasty by Charles II, who claimed the throne in 1660. There is a prevailing sense of disorder: the Salisbury Flying Coach has been upturned, a pistol is fired, a drunken Freemason is escorted home, a man is shaved in the middle of the night, and a chamber-pot is emptied out of the window.

Oil painting on canvas, The Four Times of Day: Night, by William Hogarth (London 1697 - London 1764), 1736. A moonlight scene in a narrow lane leading from Whitehall to Charing Cross, with the Rummer Tavern ('The New Bagnio') (a brothel) on one side, the Cardigan's Head on the other (both served as Masonic lodges) and at the end of the street the Golden Cross Inn and the equestrian statue of Charles I by Hubert Le Sueur in the distance. Bonfires have been lit in celebration of Restoration Day/Oak-Apple Day, 29 May, Charles II's birthday and his escape on 3 September 1651. The Salisbury Flying Coach has been upturned. Left, two men, one of whom fires off a pistol, stand watching the efforts of the passengers to extricate themselves. In the foreground towards the right a Freemason - by tradition representing Sir Thomas de Veil (d. 1747) - is supported home; further to the right the interior of a barber-surgeon's shop is seen through a window and man is being shaved in the middle of the night; above a chamber-pot is being emptied out of the window; figures are huddled asleep beneath the sill, and in the background a man is watering down a vat of beer. The oak leaves decorating the barber-surgeon's striped pole on the façade on the right, indicate that the date is 29 May or 'Oak-Apple Day', which marked the restoration of the Stuart dynasty by Charles II, who claimed the throne in 1660.

The artist's sale, his house, Leicester Fields, 28 Feb 1744/5, sold, for 26 gns (Night) and 20 gns (Morning), to Sir William Heathcote,1st Bt (1693 –1751); thence by descent (included in an illustrated MS inventory of the pictures of Hursley Park, Hants, of 1843, in Depatment of Special Collections, Getty Center, Malibu) as nos. 11 and 12 in the South Drawing Room, with a note that they featured in a Catalogue of Pictures in the Heathcote house in St James's Square of 1748; Heathcote Heirlooms sale, Christie's, 27 May 1938, lot 29; bought by Sir Alec Martin (1884-1971) on behalf of Viscount Bearsted for 2.400 gns (outbidding the Earl of Lancaster, who had commendably wished to re-unite the set) [Noon and Evening are still at Grimsthorpe Castle, Lincolnshire, present owner: Lady Nancy Jane Marie Heathcote-Drummond-Willoughby, 28th Baroness Willoughby de Eresby PC (b. 1934), daughter of the 3rd Earl of Lancaster (1907-1983)]; given with Upton House to the National Trust by Walter Samuel, 2nd Viscount Bearsted (1882 – 1948), in 1948, shortly before his death