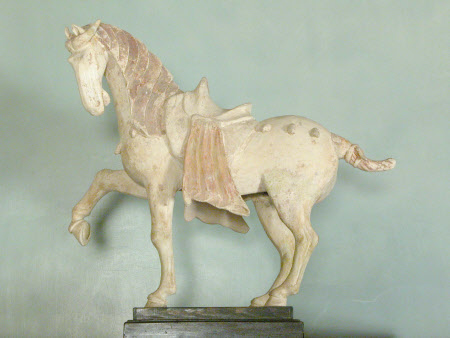 Tang dynasty pottery horse with red cold painted decoration, standing with right foreleg raised, the saddle with drapery on rectangular base (extensively restored). 7th century AD. This horse is a reflection on their connection with the Far East, both in art and trade.

A cold-painted (unfired) terracotta prancing caparisoned horse, standing with right foreleg raised, tassels and mud guards decorate its chest and rump, the saddle cloth is gathered at either side of the saddle, red pigment over slip (extensively restored), c.700–750 AD. The model, assembled from moulds, was used in elite burial tombs, probably as pairs or multiples. Western horses performed for Emperor Xuanzong (r. 712–756) on the occasion of his birthday and according to Zhang Yue (667–731), a leading court official, horses came from west of the sea and danced with bent knees, holding cups in their mouths, while prancing in step with music.