The Presentation of the Virgin at the Temple 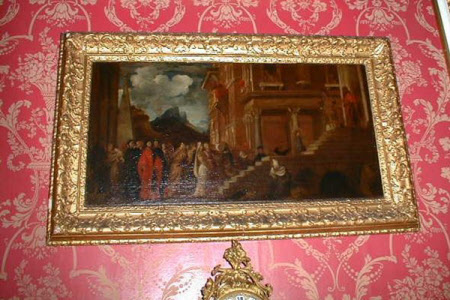 This is a reduced copy of the large picture in the Scuola della Carità (now the Accademia) in Venice. It was acquired by the celebrated collector, Sir Abraham Hume, from the Italian dealer, Sasso, who first offered it to him for 50 zecchini in a letter of 9 June 1789. It apparently came from the Pelluziolle Palace, in Venice. Hume wrote one of the earliest serious studies of Titian in 1829. In it, he wrote of this picture: “ ..the figures, sky, architecture, and landscape are touched with uncommon spirit, and the prevailing tone throughout , is as rich and harmonious as in any of Titian’s finished pictures. According to Ridolfi, several portraits are introduced in the attendant group: Andrea di Francheschi, grand chancellor of Venice, is in scarlet; next to whom in black is Lazzaro Crasso, a lawyer; and behind are the portraits of certain monks of the convent following…”