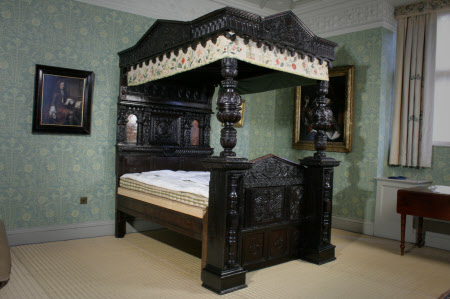 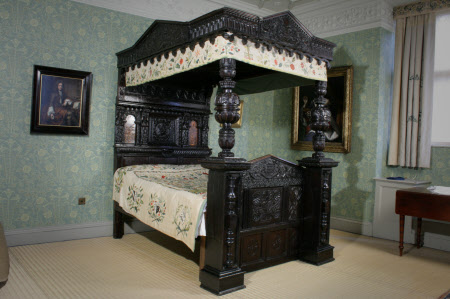 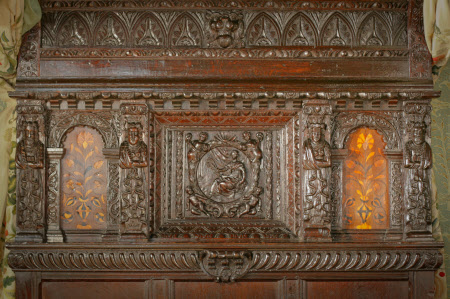 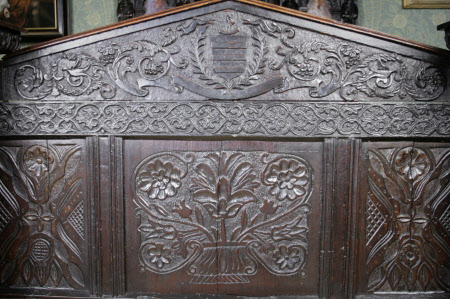 Sir James and Lady Kay-Shuttleworth began collecting carved oak furniture in the 1840s, when it was the height of fashion among owners of romantic old houses like Gawthorpe. The bed has Victorian restorations, but most of it is 17th-century and of Lancashire origin.

Carved oak tester bed, dated 1650 but made up in the 19th century using 16th- and 17th-century pieces and some Victorian additions; tester with nulled frieze incorporating a carved armorial pediment on three sides; the pediment design, showing a barred shield with bird crest amid foliate scrollwork, repeated in wider form on the foot-board above carved panels of stylised floral patterns of Lancashire type, between carved baluster foot posts; head-board of two arched inlaid floral panels flanking a carved panel of a classical goddess, separated by carved terminal figures below a lunette frieze. The bed appears in Charles Barry junior's sketch of the Wainscot Room at Gawthorpe in February 1850, so it pre-dates the Barry restoration of the Hall.