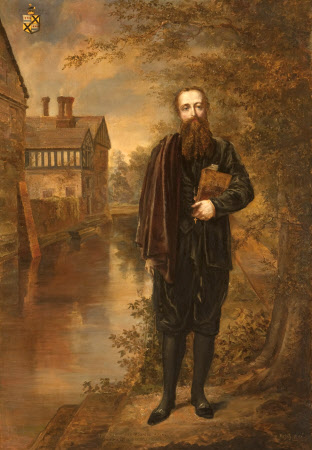 Rebecca Orpen was a talented amateur artist who married Marmion Edward Ferrers (1813-84) of Baddesley Clinton. She was prolific, working in both oil and watercolour, and much of her work remains in the house today. She and her husband lived at Baddesley with her aunt, Lady Chatterton and her husband, Edward Heneage Dering. They became known as ‘The Quartet’, revelling in art, history and their religion. On the death of their spouses, Rebecca and Edward Dering were married. This portrait shows Edward Dering holding a copy of the writings of St Thomas Aquinas, as he was studying Catholic philosophy. Baddesley Clinton, with the new wing, can be seen in the background. He is wearing the old fashioned dress, which he favoured.

Oil painting on panel, Edward Heneage Dering (1826-1892), 'The Philosopher's Morning Walk' by Rebecca Dulcibella Orpen (1830 – 1923), inscribed and signed with coat of arms. A full-length portrait, standing, holding a book of Thomas Aquinas's philosophy, and rosary and wearing velvet cloak and breeches, on steps beside the moat at Baddesley Clinton; in the background a view of the house with his new wing prominent; arms top left. Rebecca wrote '... he used to delight in going out to read or say his rosary in the early summer's mornings before walking to the 8 o'clock Mass at the Convent Church. He is holding a volume of St. Thomas' 'Questiones disputatae'. Baddesley Clinton in the background showing the new restoration of the courtyard built by him'. He married, firstly, in 1859, Georgiana, Lady Chatterton (1806-1876), the widow of Sir William Chatterton (1794-1855) and, secondly, in 1885, Rebecca Dulcibella Orpen, Mrs Marmion Edward Ferrers (1830-1923).