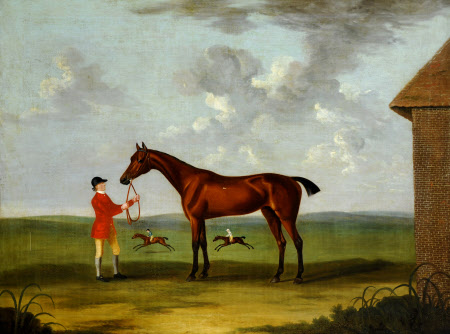 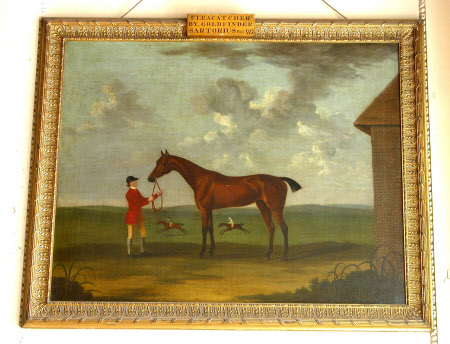 Oil painting on canvas, A Bay Horse called 'Fleacatcher' by John Nost Sartorius (London 1759 - 1828), a gilt plaque in the top centre of the frame is inscribed, 'FLEACATCHER / BY. GOLDFINDER / SARTORIUS Pinxi 1777. The bay racehorse stands, turned to the left. with a groom dressed in red in a racecourse landscape. A brick building to the right and two jockeys on horses in the background. Distant horizon with cloudy sky. This is probably Newmarket Heath with the Rubbing House on the right where horses were rubbed down after their exersions. (Inventory card) This painting forms a set with 'Trentham (P/167) and 'Goldfinder' (P/174), both in the Library. The setting is almost certainly Newmarket Heath, with the Rubbing House on the right, the building where the horses were washed down after their exercise. (House guide, last revised 1996.)