A Gathering of the Dilettanti around the Medici Venus 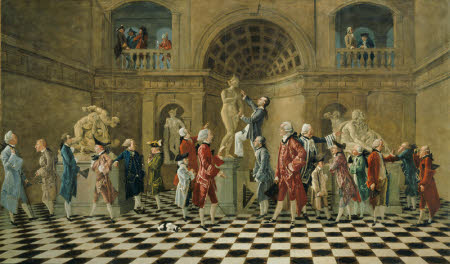 Thomas Patch is best known for his caricatures of British Grand Tourists amid the antiquities of Italy. All of the ‘dilettanti’ in this painting are based on actual figures but few can be positively identified. In the centre, Patch has depicted himself climbing up the pedestal of the Medici Venus.

Oil painting on canvas, A Gathering of the Dilettanti around the Medici Venus by Thomas Patch (Exeter 1725 - Florence 1782), circa 1760-1. Five of the sculptures from the Grand Ducal collection are arranged in an imaginary exhibition hall, decorated with a heavy entablature supported by Doric pilasters. In the centre is the celebrated Venus de’Medici, to the right the Dancing Faun and to the left, Mercury. Also to the left and right are the Wrestlers and Arrotino (knife-grinder). Nineteen men in profile, wearing a variety of colourful suits, and a dog converse amongst the statues. Six more flgures appear on the balconies above. One of the men could be Robert Lowther (1741 - 1777), the putative first owner of the picture, who was recorded in Rome in May 1760. Most of the men can no longer be identified but the artist himself, who had been expelled from Rome in 1755 for homosexual indiscretions, appears, wearing his favourite seaman’s trousers, holding a pair of dividers, measuring the distance between the nose of Venus and her wrist. He is being directed by his friend the diplomat and Florentine resident Sir Horace Mann (1706 – 1786). Johann Zoffany painted his famous scene of Grand Tourists in the Tribuna, Uffizi, Florence about 15 years later, now in the Royal Collection, and also included Patch and Mann. George Nassau Clavering-Cowper, 3rd Earl Cowper (1738–1789) and the antiquarian Raimondo Cocchi (1736 - 1775) are also present. When Sir Brinsley bought the picture it was divided into four panels to form a screen and has since been restored.