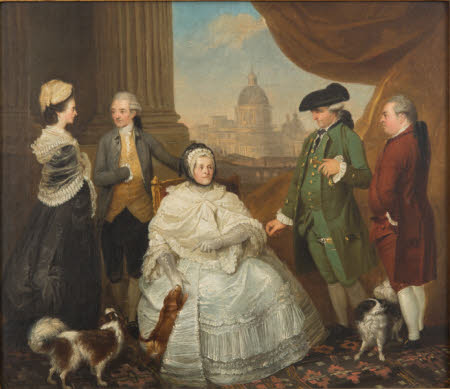 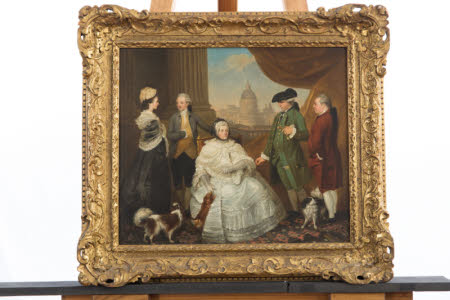 Oil painting on canvas, The Byres Family by Franciszek Smugliewicz (Warsaw 1745 - Vilnius 1807), circa 1776 -1779. James Byres came from an Aberdeenshire Jacobite family. However, he left Scotland after the failure of the 1745 Rising. He was educated in France and was in Rome by 1758, training first as a painter and then as an architect. He also established himself as a leading art dealer and professional guide in the city until 1790. The portrait group shows his mother, Janet Moir (1711 - 1787), seated in the centre, with her husband Patrick Byres of Tonley, who stands to her left dressed in green. James stands with his hand resting on her chair whilst conversing with his sister Isabella, Mrs Robert Sandilands, beside him. Her husband had died in 1775 and she is shown wearing mourning. On the right is Byres’s business partner and engraver, Christopher Norton (1738 (?) - 1799) in a red suit. The group is gathered on a terrace with fluted columns and red and green drapery which are pulled back to show a distant of view of St Peter’s. The same group can be seen in an interior of the same date when Mr and Mrs Partick Byres were in Rome between 1776 and 1779 in the Scottish National Portrait Gallery (PG2601). The artist was born in Warsaw but moved to Rome in 1763 where he studied under the Austrian painter, Anton Maron and became fascinated by archaeological excavations, making copies of antique frescoes. He returned to Warsaw in 1784 where he opened a painting school. He settled in Vilnius in 1797, as the director of the new School of Fine Arts and produced large altarpieces and Polish historical scenes.

Recorded in the Byres collection in 1790; Christie's 18 October 1957 (148) as Arthur Devis; bought by J. M. Haining; Leger Galleries from whom bought by RBF and attributed it firstly to Philip Wickstead; on loan from Augustine Ford, from the collection of Sir Brinsley Ford (1908-1999)