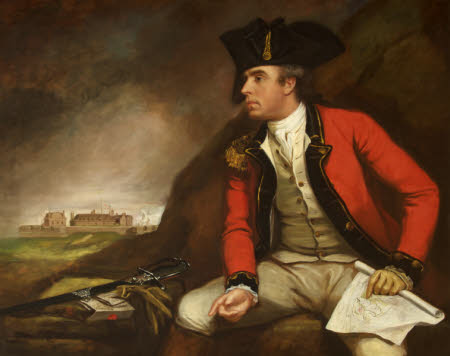 Oil painting on canvas, Captain Sir Thomas Hyde Page, FRS (1746-1821) holding a Plan of Fort Landguard and seen in the distance by James Northcote, RA (Plymouth 1746 – London 1831), 1783. A seated three-quarter-length portrait, in the uniform of the Royal Regiment of Engineers, holding a plan of new works at Languard Fort, and inscribed thus, in his left hand, with Landguard Fort, Suffolk beyond. The plans underneath his sword with the red seal are inscribed: Townshend Fort [Sheerness, Kent] and Languard [Suffolk] and the plan on top is inscribed: Amherst [Chatham, Kent]. In 1777 he married Susanna, daughter of Sir Thomas Crawley-Boevey, 1st Bt (1709-1769), widow of Edmund Bastard of South Warnford, Devon whom she had married in 1766. In 1783 he married Mary Albinia (d. 1794), daughter of John Woodward (formerly Captain in the 70th regiment) of Ringwould, Kent, and they had five children. Their daughter, Mary Albinia, married Sir Thomas Crawley-Boevey, 3rd Baronet (1769–1847).