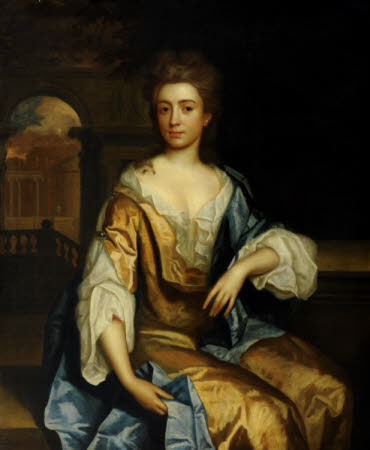 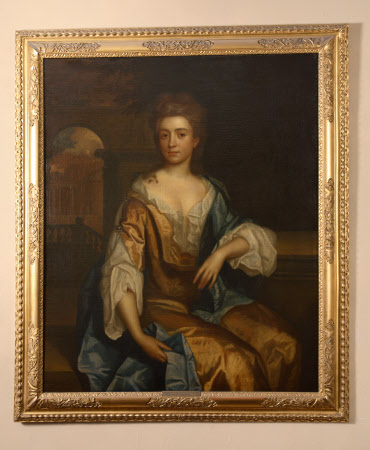 Oil painting on canvas of Elizabeth Gunter (born c.1669), wife of Nicholas Starkie (1661-1735) by a follower of John Riley (London 1646 – London 1691), c.1690. Three-quarter-length portrait of a young woman, seated, turned to the right, gazing at the spectator, wearing a low-cut gold dress over a white chemise with a blue cloak on her left shoulder and draped on the seat and held with her right hand. Arch on the left with distant view.

This portrait is the only in the East Riddlesden Hall collection thought to show someone who owned and probably lived there, although the identity of the sitter is not certain. It was purchased at auction in 1984 from a descendent of the Starkie family as Sarah Starkie (née Ffarington), an identification it has had since at least the early 19th century. Sarah Starkie was born around 1706 and married Nicholas Starkie (d.1764). They inherited East Riddlesden c.1737 from his parents, Nicholas and Elizabeth Starkie. However, more recently the painting has been re-dated to c.1690 based upon the costume she is wearing, so this would suggest it is not Sarah, but someone from an earlier generation. The most likely candidate is Sarah’s mother-in-law, Elizabeth Starkie (née Gunter). Elizabeth was daughter and heiress of Colonel Gunter of Alborne, Wiltshire and married Nicholas Starkie in 1689. This portrait was probably painted around the time of her marriage. Nicholas inherited East Riddlesden in 1712 from his uncle Edmund.