Mercury and Argus (after Quellinus) 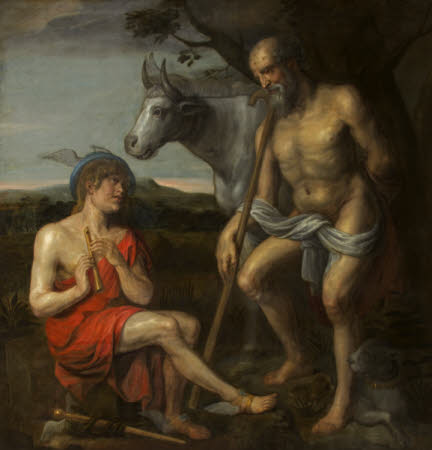 This scene is taken from the Roman poet Ovid’s Metamorphoses. One of Jupiter’s many loves was Io, a princess of Argos. When this was discovered by his wife, Juno, she turned Io into a white heifer, and handed the animal over to the hundred-eyed giant, Argus, to guard. Mercury was sent by Jupiter to kill the giant, which he did after first lulling him to sleep with music.

Painting. An oil painting on canvas, Mercury and Argus (after Quellinus), English School, c1675. The draped figure of Mercury, winged hat on head, sits poised to play his pipe, on the left. The nearly naked Argus, with many eyes covering his head, stands on the right holding a crook against his shoulder, a tree behind him. A white heifer cow, the transformed Io, a princess from Argos, whom Juno was jealous of because she was loved by Jupiter, can be seen in the centre middle distance. After an engraving by Hubertus Quellinus (Antwerp 1619 - Antwerp 1687), published in 1665-1668 based on a relief in the Burgerzaal in Amsterdam Town Hall by his brother, Artus I Quellinus (Antwerp 1609 - Antwerp 1688).

Inset above fireplace; on loan with Tredegar House from Newport Museums and Galleries