A Lady receiving a Letter 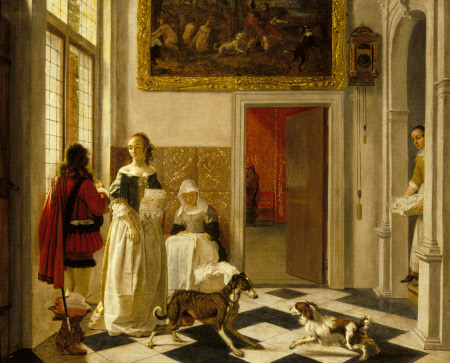 Oil painting on canvas, A Lady receiving a Letter by Ludolf de Jongh (Overschie 1616 - Hillegersberg 1679), signed on the picture of 'Diana and Actaeon' (based on an engraving by Antonio Tempesta) hanging in the background: L. C. D. Jonge, circa 1658. Four figures in an apartment with a black-and-white tiled floor and a door at the end leading to another room, above which hangs the picture of Diana and Actaeon; a lady, in blue and white dress holds a letter or deed, which she has evidently just received from a cavalier who stands at the right beside a window with his back to the specatator, wearing a red claok; an old servant sits sewing in the background and a young one enters from a door at the right with a basket of linen. In the foreground are a spaniel and greyhound. (Pentiments in figure seen through background door). The subject of the picture may be symbolic as Actaeon was devoured by his own hounds after accidentally seeing Diana and her nymphs bathing.