The Return of Orestes (from Electra by Sophocles) 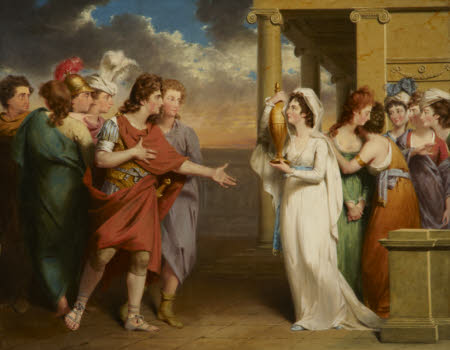 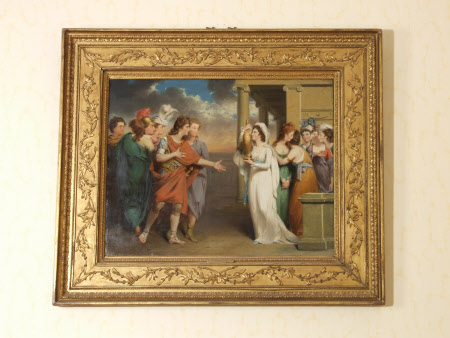 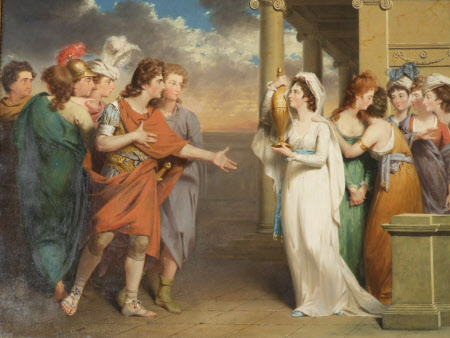 Oil painting on panel, The Return of Orestes (from Electra by Sophocles) by John Downman, RA (Ruabon, North Wales 1750 – Wrexham 1824), 1782. Six male figures dressed in classical robes stand outside an Ionic pillared temple. They include The Rt Hon.Charles James Fox MP (1749-1806), far left, and other prominent figures of the time. The leading figure gesticulates towards a group of six ladies to the right, dressed in classical garb, the one in front holding up a covered urn. According to the Greek poet, Homer, Orestes returned from Athens and with his twin sister Electra avenged his father's death by slaying his mother and her lover Aegisthus. Orestes had been absent from Mycenae when his father, Agamemnon, returned from the Trojan War with the Trojan princess Cassandra as his concubine, and thus not present for Agamemnon's murder by his wife, Clytemnestra, who has taken Agamemnon's cousin Aegisthus as a lover, in retribution for his sacrifice of their daughter Iphigenia to obtain favourable winds during the Greek voyage to Troy. However, according to the Royal Academy 1782 exhibition the scene alludes to the play Electra by Sophocles. Electra had orginally rescued her young, twin brother Orestes from their mother by sending him to Strophius of Phocis. The play begins years later when Orestes has returned as a grown man with a plot for revenge, as well as to claim the throne. Dowman also exhibited a 'grotesque' picture of The Ghost of Clytemnestra awakening the Furies from the Greek tragedy The Furies by Aeschylus, which is now in the Paul Mellon Collection, Yale Center for British Art, New Haven at the Royal Academy in 1782 (132). It follows the story chronologically depicting the ghost of the wicked Clytemnstra arousing the demonic ‘Furies’ to pursue her murderer, Orestes.