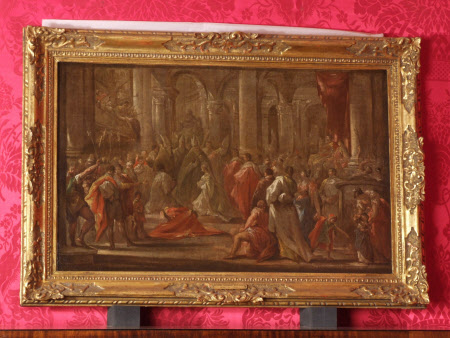 Oil painting on canvas, Sketch for the Coronation of the Empress Eleanora Magdalena Theresa of Pfalz-Neuburg in 1690 by Giovanni Antonio Pellegrini (Venice 1675 - Venice 1741). In the interior of a classical cathedral (representing, but not in any way a depiction of, Augsburg’s gothic cathedral) six bishops (the three Archbishop-Electors, plus the other three bishops present: those of Brixen, Fulda and Kempten) bless the kneeling Empress. An acolyte kneels near her, two crimson-robed figures (the two Catholic secular Electors: those of Bavaria and of the Palatinate) stand behind her, the Emperor and their son Joseph (who was crowned King of the Romans there a week later) are enthroned under a canopy at the right, an orchestra is in a gallery upper left, and quantities of other figures throng the scene. This is the first sketch for the picture painted by Pellegrini for Schloss Bensberg, nera Cologne in 1713–14, which is now at Schloss Schleissheim, Bavaria. An intermediate sketch, making numerous changes to the dress and poses of the figures, and introducing the celestial participants found in the final picture, but still a bozzetto, was recognized and reattributed to Pellegrini from Maffei by Pallucchini, and published by him in ‘Novità ed Appunti per Giovanni Antonio Pellegrini’, Pantheon, vol.XVIII, p.245, illus. p.246; later in the sale of the collection of Professor & Mrs Joseph Matzker, Sotheby’s, London, 7 December 1988, lot 57 (dating the event to 14 December 1676, and mentioning the Dutton picture); and finally, acquired by the Niedersächsisches Landesmuseum, Hanover.