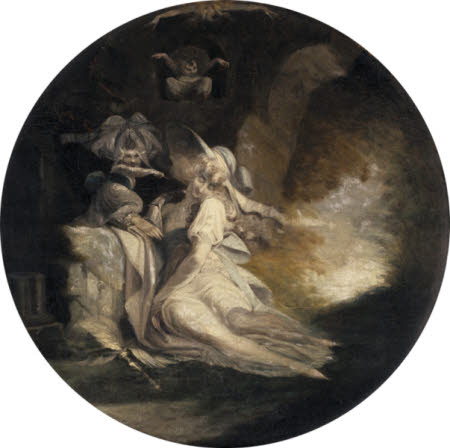 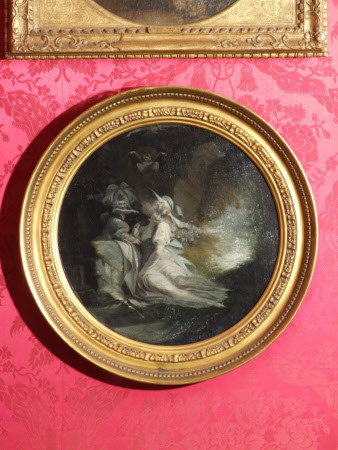 Oil painting on canvas (circular), A Shakespearean Subject by Henry Fuseli (Zurich 1741 - London 1825), 1785-1786. An elegantly dressed and behatted lady, with a feather fan, reclines on the ground, leaning against a rock, asleep; an ugly little dwarf of a woman, also in a fashionable hat, squats on the rock and points at her; above, a little figure raises both arms as if in incantation. Always identified as showing Perdita, and sometimes specifically, as she is spoken of in Time’s prologue to Act IV of 'The Winter’s Tale' (Scene I:24-25 – sometime mis-cited as Scene II), "To speak of Perdita, now grown in grace/ Equal with wond'ring", this picture must in fact have another protagonist: this is not an innocent shepherdess of sixteen, nor does any scene in 'The Winter’s Tale' have Perdita asleep, or visited by sprites and goblins. The mis-identification is evidently due to both drawing and painting of this composition being paired with an actual scene from 'The Winter’s Tale': Mamillius conjuring up sprites and goblins for his mother, Hermione. That episode (Act II, Scene I) was, however, interrupted by the entrance of his father and her husband, King Leontes, with ‘Antigonus, Lords, and Others’, and there does not appear to be any other scene in the play whose action the present picture might illustrate. There is, however, a third tondo of the same size as the pair at Hinton Ampner that shows a Shakespearean scene with creatures from the spirit world, around either Titania from 'A Midsummer Night’s Dream' (Act III, Scene I) or Queen Mab, as in Mercutio’s description of her in 'Romeo and Juliet' (Act I, Scene IV), that was in the collection of Pierre Jeannerat in London (Gert Schiff, Johann Heinrich Füssli, Zurich, 1973, no.752; exh. cat., Henry Fuseli, 1975, no.24). It seems much more likely, than its showing Perdita, that the present picture shows an episode from some other Shakespearean play. [?Miranda asleep, Act I, end of scene 2 of The Tempest]