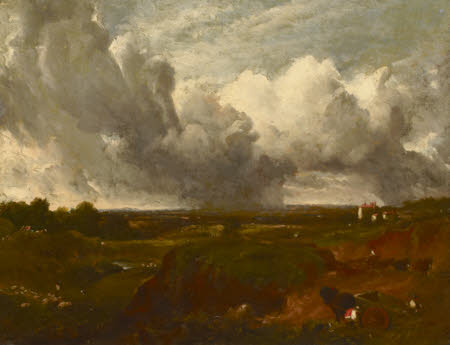 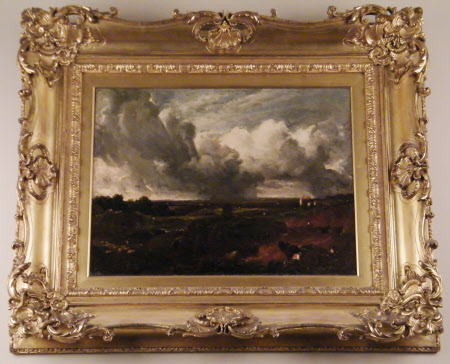 The view in this picture is taken from below Judge’s Walk to the north-west, with Branch Hill Pond in the middle distance. The house known as ‘Salt Box’ is shown on the high ground to the right. A sketch in the V&A, by Constable, shows the same view, but two other versions in the Virginia Museum of Fine Arts and the Tate, are more closely related. This picture is not by Constable, but by an artist who has tried to approximate his style. John Constable was a Romantic painter, who was inspired primarily by nature. Not only did he seek to portray the beauty and power of nature, but he also investigated the scientific aspects of his subject-matter. Cloud studies, such as this one, were typical of his work. By looking at the sky and cloudscape, he tried to portray atmospheric conditions in paint.

Oil painting on canvas, Hampstead Heath, London, after John Constable, RA (East Bergholt 1776 – London 1837), 19th century. A horse and cart bottom right, with house with sun on it in right distance. A flock of sheep left. A great sweep of cloud moves up from the horizon towards the left. A sketch in the V&A shows the same view but the one most closely related is in the Virginia Museum of Fine Arts and another in the Tate. It is taken from below Judge's Walk to the north-west, with Branch Hill Pond in the middle distance and the house known as Salt Box on the high ground at the right.

Reputedly W. B. Chamberlain (Yorkshire), and George Salting 1909; bequeathed by Katherine Salting, Lady Binning (1871 - 1952) to the National Trust as part of the contents of Fenton House