Landscape with Birds and Fishes 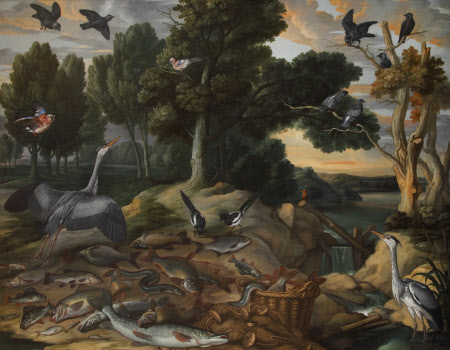 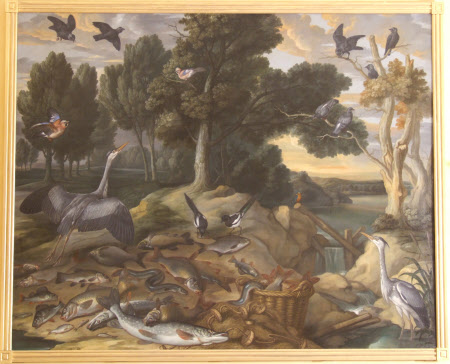 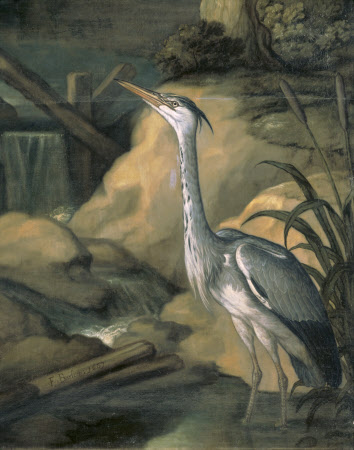 Oil painting on canvas, Landscape with Birds and Fishes, by Francis Barlow (Lincolnshire c.1626 - London 1704), signed and dated 1667. A landscape with parkland to the left and an expanse of water to the right, with fish on the ground and in a basket, and birds on the ground, in the air, and on branches. A heron stands at the right, with its feet in the stream running down from a dam. In front of the heron is a wooden pole, on which the artist has signed and dated the painting. Another heron takes off from the ground to the left, and is shown in mid-flight. Between the two herons are many fish. A freshwater eel hangs out over the edge of a basket full of carp, while another eel lies on the ground to the left. Further carp can also be seen on the ground. In the foreground are two large, silvery pike, and to the left of them are three small minnows. Under the feet of the heron at the left are two barbel, one of which is seen only in part. Below them are two perch, with their red-tinged fins and striped markings. Another perch can be seen near the basket of carp. Two magpies stand on the ground near the fish, one of them proceeding to eat part of a roach in front of them. Another roach is visible to the left, just underneath the right wing of the heron. Between the heron and the magpies is a tench. Another tench lies near it, between a barbel and a perch, by the feet of the flying heron. A kingfisher perches on one of the poles or branches used to dam the stretch of water. To the left, a jay is in mid-flight and another is perched in a tree in the middle of the composition. Two jackdaws are in flight at the top left, and another three perch among the branches of a dying tree at the right. Below them on the same tree are two woodpidgeons. The sun appears to be setting or rising at the far right.

Evidently, from the dating of this painting (1667), one of the three (but possibly more) pictures by Barlow at Clandon originally painted for Sir Robert III Parkhurst, Kt (dubbed 1660; died 1674) at Pyrford; acquired with the latter by Denzil Onslow, MP (1640/1–1721) in 1677, seen by Evelyn there in 1681 (who said that the hall was “adorned with paintings of fowle, & huntings, &c.; the work of Mr. Barlow who is excellent in this kind from the life”), and left by Denzil with Pyrford to his great-nephew, Thomas, 2nd Baron Onslow (1679–1740) at Clandon, where seen by Horace Walpole in 1764 (who mentions “four or five large and good pictures of animals by Barlow”). “Three large Pictures of Fowls” were listed in the Large Saloon in 1778, but only two were mentioned in the house by J.P. Neale in 1826, though he does specifically state that they had come from Denzil Onslow’s seat at Pyrford;Marked in Lady Iveagh’s 1966 Inventory, p47; Accepted by the Treasury in lieu of Estate Duty on the death of Lady Iveagh in 1968 and transferred to the National Trust (1968 Schedule B)