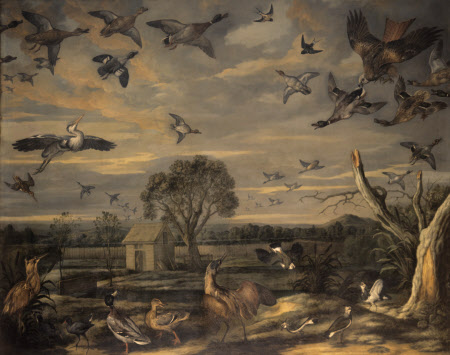 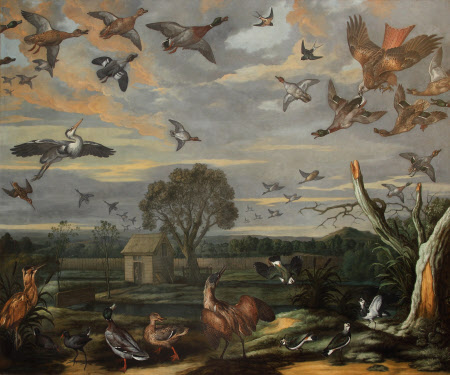 Oil painting on canvas, A Decoy, by Francis Barlow (Lincolnshire c.1626 - London 1704), circa 1667 - late 1670s. Birds in a landscape, on the ground, and in flight. In the middle ground is a narrow canal with a lock, and a small wooden hut by a tree, into which a figure is entering. The estate is separated from the landscape beyond by a wooden fence crossing the composition. In the foreground are two bitterns, one standing at the far left, and one in the centre, looking upwards and right to the sky, where a red kite is attacking a male mallard in flight, while other mallards protest. Two further mallards, a male and a female, are on a path in the foreground with two moorhens. To the right, by a tree trunk, is a group of lapwings, one of which is in flight. A teal is in flight above the tree, and two others, shown from below, are in the centre-left of the composition, and to the left of the mallard being pursued by the red kite. At the left is a heron in flight, and a woodcock flying down towards the canal. At the top of the composition are more mallards in flight and two swallows.

Francis Barlow was born around 1626, probably near Manchester. He was this country’s first wildlife painter and a prolific book illustrator and print maker. He’s best remembered for an extraordinary illustrated edition of Aesop’s fables. Barlow completed an apprenticeship with the Painter-Stainers Company of London in 1650. His training combined cutting-edge techniques such as perspective, shading, and modelling of form, with the traditional craft of sign painting. He learned a great deal about drawing creatures ‘after the life’, usually from preserved specimens. By 1665, Barlow had established a shop in London called The Golden Eagle, in New Street near ‘Shoo Lane’, close to St. Paul’s Cathedral. The Golden Eagle was destroyed in the Great Fire of 1666 but Barlow quickly re-established himself; his three large pictures at Clandon were all made during the decade after the fire. Barlow’s prints and paintings revealed such accuracy that naturalists and intellectuals took interest. Copybooks allowed his prints to be used in different ways. They were used in schools to teach children about creatures found in the countryside and by craftsmen who needed reference pictures for coats of arms, shop signs and banners. Barlow was also political. During the Exclusion Crisis, he produced numerous anonymous satirical prints including designs for a pack of playing cards depicting scenes from the Popish Plot and a political emblem glorifying Oliver Cromwell. We have six Barlow paintings at Clandon, one of the largest collections in the country, including three huge 9x11ft canvases. All these pictures were acquired by the Whig MP, Denzil Onslow. The large canvases were probably designed as a trio to decorate the great hall at his home, Pyrford Court. Later the pictures were moved to Clandon Park, which replaced Pyrford as the family seat. The pictures functioned like windows onto the countryside serving as a visual complement to banquets. They would have been seen day after day, designed to be appreciated on many levels and probably decoded over dinner as a form of entertainment. Two of the large paintings, 'A Decoy' and 'Landscape with Birds and Fishes', were cleaned and restored in 2006. (Based on the guidebook written by Nathan Flis for the 2010 exhibition, Francis Barlow: Painter of Birds and Beasts)