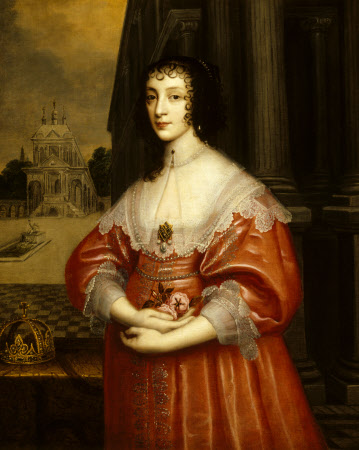 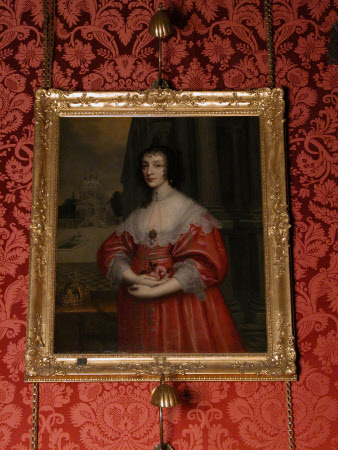 The pose and dress of this three-quarter-length portrait of King Charles’ wife, standing slightly left with hands clasped in front, holding roses and wearing a pinkish dress trimmed with muslin, are a retrospective simplification from Van Dyck's Barberini portrait of the Queen, of 1635. However, it is unique image. The realistic looking building, at the far end of a paved courtyard, or piazza, in the background, with some similarity to the Belvedere in Prague, has not been identified; it corresponds to no known structure built in England, nor does it seem to record one in the sitters native France. It is similar to the structure in the background of Paul van Somer's portrait of Henrietta Maria's deceased mother-in-law, Anne of Denmark, painted at the age of 44 in 1618 in the Royal Collection. And the building immediately behind the Queen is like a contemporary Venetian palace.

Oil painting on canvas, Queen Henrietta Maria (1609 - 1669), school of Sir Anthony Van Dyck (Antwerp 1599 - London 1641), formerly called 'after Dobson', late 17th century. In the background is a piazza with fantastic buildings. A three-quarter-length portrait of wife of Charles I, standing slightly left, hands clasped in front, holding roses; wearing a pinkish dress trimmed with muslin; in the background at the right a columned building, and at the far end of a paved court, left, an imaginary building with colonnades on two storeys which reflect the influence of Steenwyck the Younger, who was in London from 1617 until after 1637.