The Presentation in the Temple 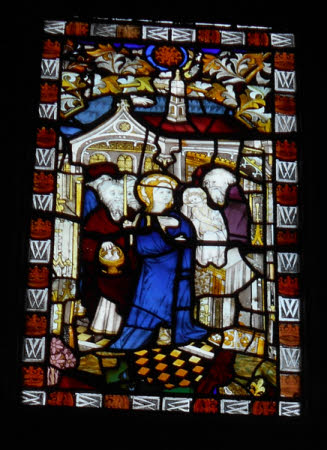 A stained glass panel from the fifteenth century, depicting The Presentation in the Temple. A fifteenth century medieval panel originally from the East window of St Peter Mancroft. It was removed from the church in 1837 for improvements and restored by John Dixon, c.1841. The panel depicts the Presentation in the Temple. The Virgin is the central figure, with the infant Christ on the right in the arms of Simeon. Two sacrificial turtle doves are ready for offering in a basket on the left in Joseph’s hand. There are two male figures in the background. The hand of God blesses the scene over the roof of the temple. There is a scrolling floral pattern with a sun in the centre above this scene. The outer borders show a repeated crowned monogram - an overlapping ‘WW’ for William Wykeham.