Kitchen Interior with Christ in the House of Mary and Martha 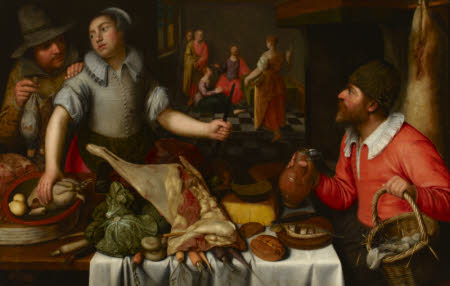 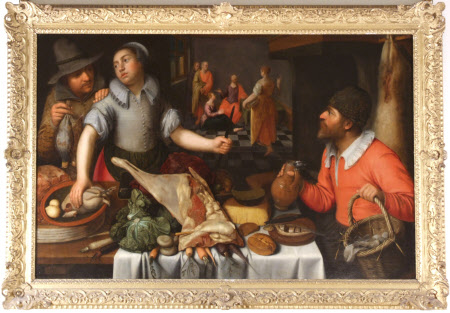 Oil painting on canvas, Kitchen Interior with Christ in the House of Mary and Martha by Cornelis Engelszen (1575-1642/3), signed bottom left in mongram: CE f (?indistinctly dated). Three figures round a kitchen table, piled with vegetables, in the foreground. A man at the left holding a basket of eggs and a flagon. Behind the table a servant girl about to carve a chicken and at her shoulder a young man with a brace of partridges. In the background in another room Christ is seated with Mary and Martha. Modern still-life painting began in the Low Countries with artists like Beuckelaer and Aertsen, who often coupled kitchen scenes with this episode in Luke (10;38-42), in which Martha, the archetype of the busy cook, chides her sister Mary Magdalen for sitting in apparent idleness listening to Christ. The practice of subordinating a religious scene in favour of a still life and this providing a title derives from Tintoretto and was practised widely in the Low Countries in the 17th century as well as by Velasquez in his early 'bodegones'

Early 19th century hanging-plans, in the Dining Room: '5. Martha and Mary Two Bassans' [overmantel] [not in H. R. Bolton's list of pictures cleaned in 1849]; and thence by inheritance and descent, until accepted in lieu of tax on the death of Admiral the Hon. Sir Herbert Meade-Fetherstonhaugh (1875-1964) in 1965 and transferred to the National Trust by the Treasury, September 1990