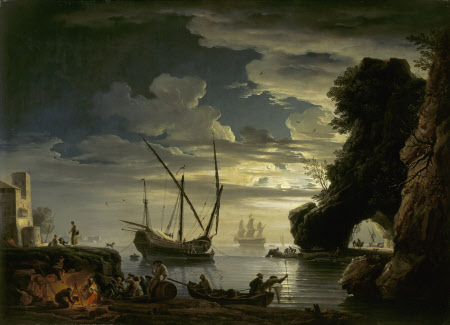 Although this set of the Four Times of Day now hangs at Uppark, along with copies of three of them by Lacroix de Marseille, the date of 1751 on both sets indicates that the Vernets were not the ones commissioned by Sir Matthew Fetherstonhaugh in April of that year - which were apparently never executed - but those commissioned the year before by his wife's brother, Benjamin Lethieullier. Night is of a rocky inlet by moonlight, with fisherfolk setting their nets, cooking over a fire, and drinking.

Oil painting on canvas, Night: Rocky Inlet with Fisherfolk setting their Nets, cooking and drinking by Claude-Joseph Vernet (Avignon 1714 – Paris 1789), signed on stern of rowing-boat: Josph Vernt/f. Romae/1751. The scene shows a seaport by moonlight with figures on the shore in the foreground with some lighting a fire. Ships moored out to sea and a rock in the form of an archway at the right. From the set 'The Four Times of Day. A copy of this by Lacroix de Marseilles is in the Staircase Hall at Uppark.

Commissioned by Benjamin Lethieulllier; with Fetherstonaugh family at Uppark, and by descent; acquired by HM Treasury in 1965 in part payment of death duties and transferred to the National Trust, September 1990