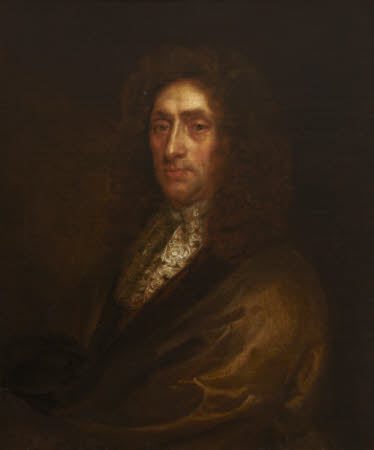 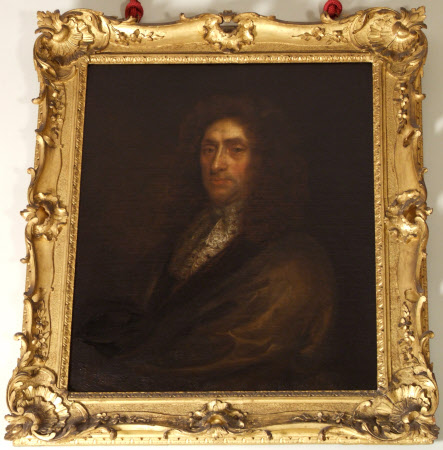 Oil painting on canvas, Sir Heneage Fetherston, 1st Bt (1627-1711), British (English) School, late 17th century. Inscribed on reverse: on back of canvas: Sir Hennage Fetherston Bar/Father of S Henry Fetherston/Bar of Hasingbrook/in the County of Essex Painted about 1676. A painted oval head-and-shoulders portrait, turned to the left, gazing at the spectator, in brown coat, white lace cravat and long wig. Eldest son of Henry Fetherston of Hassingbrook Hall, Essex and father of Sir Henry Fetherston, according to a label on the back, but the date of the picture (c.1680s) and the age of the sitter cast doubt on this identification. The sitter was the only son of Henry Fetherstone (d.1647), a stationer of Blackfriars, & of Hassingbrook in Stanford-le-Hope, Essex, which the latter had bought in 1629 (his parents were Cuthbert & Katherine Fetherstone, q.v.), and his second wife, Katharine, daughter of Michael Heneage, Keeper of Records at the Tower. He was born 1627-8, was created baronet in 1660, and married (reputedly also in 1660, which is impossible, from the birthdates of their children: more probably in 1650), Mary, daughter of Sir Thomas Bennet of Babraham, by whom he had nine children, including Sir Henry, 2nd & last Bt.

Early 19th century hanging-plans in the Stone Hall: 'l. [or 13] Si Sir Heneage Fetherston Sir G. Kneller' [overdoor to the left of chimney breast, or overdoor on opposite wall]

Sir Heneage Fetherston Bart. / Father of Sr Henry Fetherston / Bart of Haringbrook / in the county of Essex Painted about 1676 (label on canvas on reverse)