The Parable of the Prodigal Son: Receiving his Portion 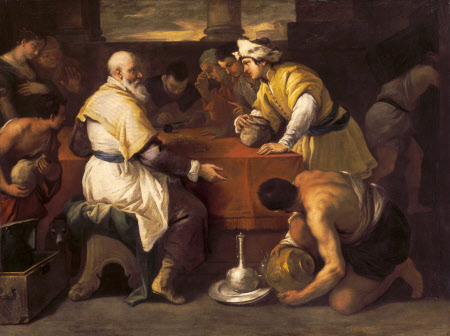 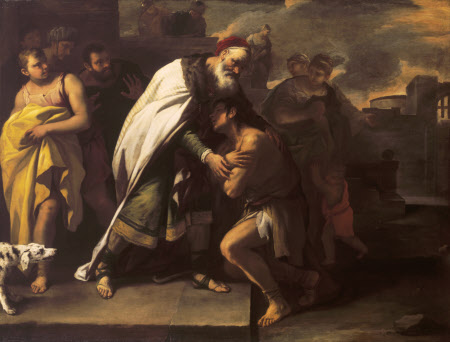 Oil painting on canvas, The Parable of the Prodigal Son: Receiving his Portion by Luca Giordano (Naples 1632 – Naples 1705), 1680-1685. The scene depicted is from the Parable of the Prodigal Son, related in the biblical Gospel of St Luke (15:11-32). Here the son is receiving his portion. He leans across the table to his father, seated in the front, who points to a servant in the right foreground pouring water from an ewer. Another figure on the left counts out his inheritance. The son wears a yellow doublet and white fur hat. The first in Giordano's cycle of six scenes, possibly painted in Florence in the early 1680s and probably acquired by Sir Matthew Fetherstonhaugh, 1st Bt MP (1714-1774) on his Grand Tour (circa 1750).

Almost certainly bought by Sir Matthew Fetherstonhaugh 1st Bt MP (1714-1774) in Italy on his Grand Tour (probably in the Spanish kingdom of Naples), 1750/51; Fetherstonhaugh (now Dover) House, Whitehall; accepted in lieu of tax on the death of Admiral the Hon. Sir Herbert Meade-Fetherstonhaugh (1875-1964) in 1965 and transferred to the National Trust by HM Treasury in September 1985