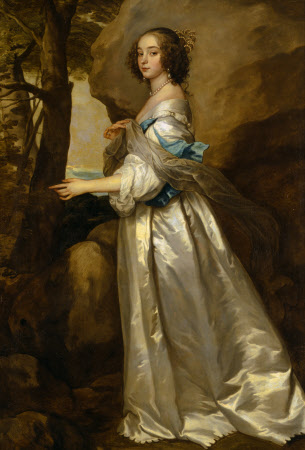 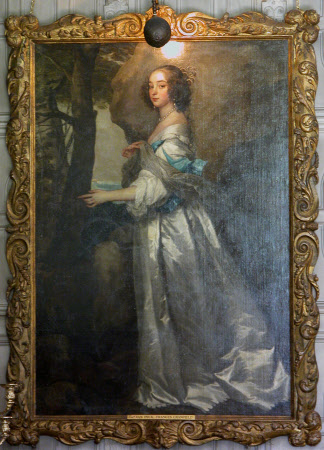 Lady Frances, daughter of Charles I's fallen minister Lionel Cranfield, 1st Earl of Middlesex, was probably painted shortly before her marriage to Richard Sackville, Lord Buckhurst, later 5th Earl of Dorset, in early 1637. The marriage was particularly important for Knole, because Frances inherited (although much later in 1674) the estates of her father, thus bringing many important paintings and furniture to the home of the Sackvilles. This lovely portrait, combining elegance and naturalness, is typical of the ‘careless Romance’ with which Van Dyck depicted the young aristocratic women of England and which revolutionised English portraiture in the seventeenth century. The 'wilderness' setting may be intended to symbolise the natural world that she was leaving for the artifice of life at Court. The carved and gilded frame is a rare British survival of the 1630s. It is of pre-Sunderland type and without auricular ornament and of exceptional interest. A surviving bill in the National Portrait Gallery archive suggests that it may have originally been supplied by the painter George Geldorp (1595 - 1658) with a contemporary copy of this portrait (also at Knole).

Oil painting on canvas, Lady Frances Cranfield, Lady Buckhurst, later Countess of Dorset (?1622 - 1687) by Sir Anthony Van Dyck (Antwerp 1599 - London 1641), circa 1637. A full-length portrait of a young woman, daughter and subsequently the sole heiress of Lionel Cranfield, 1st Earl of Middlesex, turned to the left, gazing at the spectator, in a landscape, wearing a long white satin decollete dress, with green lined sleeves and blue stole knotted with pearls over her left shoulder; her left hand is held forward and in her right is a chiffon scarf which falls across her left arm, she also wears a pearl necklace and pendant pearls earrings. Lightish brown hair, brown eyes. Landscape background with rocks and trees. It was probably commissioned by her father at the time of her marriage to Richard Sackville, Lord Buckhurst, later 5th Earl of Dorset. She was the eldest daughter and eventual heiress of Lionel Cranfield, 1st Earl of Middlesex (1575-1645) and his second wife, Anne Brett (d.1670). In 1637 she married Richard Sackville, Lord Buckhurst, later 5th Earl of Dorset (1622-77), and the marriage eventually brought to Knole (in 1674) all the Middlesex estates and possessions, including Copt Hall, which was sold in 1701. After Lord Dorset’s death in 1677, Frances married the Hon. Henry Poole, sometime Master of the Rolls.

One of the loveliest of Van Dyck's portraits of young women, even though from midway in his English career, when some of its elements were derived from stock, and - one presumes - their execution partly delegated to his studio. What is particularly effective is the way in which this attractive and marriageable young daughter of a fallen minister and nobleman is shown in all her finery, her hair fashionably dressed, but in a 'wilderness' setting, with nothing but her gauzy veil to bridge the gulf of unreality between the costume and the context - to suggest the "careless Romance" of dress that William Sanderson was later to single out as one of Van Dyck's most distinctive contributions to English female portraiture . The rocks not only set off the sitter's softness and delicacy with their rough hardness, but provide the perfect isolating foil for her bust. It is not exactly an Arcadian portrait - there are none of the traditional appurtenances of the shepherdess - but the setting effectively removes the sitter from the real world to set her in the context of the pastoral poetry of the day: Farewell Sweet Groves to you; You Hills, that highest dwell; And all you humble Vales, adieu; You wanton Brookes, and solitary Rockes. (from George Wither's "Ah me! Am I the Swaine", 1622) The picture may indeed have been intended to carry the implication of the sitter's taking leave of the natural life of a girl for that of a woman, caught up in the artifice of the Court, since it seems most likely that it was painted just before her marriage, which probably took place in early 1637, to Richard Sackville, Lord Buckhurst, later 5th Earl of Dorset (1622 -77), though they were not to cohabit until 1641. Not only would it appear to have been painted close in time to the portrait of her niece, Lady Anne Carey, Viscountess Clandeboye, later Countess of Clanbrassil (Frick Collection, New York), which bears a later inscription dating it to 1636, but which may in fact have been painted just before her marriage to James Russell, Viscount Clandeboye, in November 1635; but a bill from George Geldorp to her father, Lionel Cranfield, 1st Earl of Middlesex, recently rediscovered in the archives of the National Portrait Gallery by Jacob Simon (to whom I am most grateful for communicating a transcript of it to me), includes the sum of £6: "pour une bordure fort Riche pour le Portraict de Madame ffransis Coppie" - this style strongly implying that she was not yet married. The setting was evidently thought so apt or evocative that Van Dyck used it for a third female sitter, Lady Isabella Rich, who married Sir James Thynne in (what is apparently the best version of which, from the Breadalbane collection, was last sold at Christie's, 24 April 1987, lot 72; in this the sitter holds a lute, her playing of which was celebrated in a poem by Edmund Waller). Yet he also employed it for a male sitter, James Hamilton, 3rd Marquess and later 1st Duke of Hamilton , which is thought to have been painted as late as 1640. In this, the rocks instead reinforce the adamantine message conveyed by the full suit of armour worn by the sitter, donned in consequence of the Scottish Wars. It is always perilous to make assumptions about frames belonging to pictures, but there is nothing to indicate that the one on the present portrait has been changed, or adapted to it from another picture. That makes Geldorp's bill of particular interest, since it denotes this as a closely datable example of what might be called a "pre-Sunderland' type of frame. Other, more scrolly and probably slightly later, examples are found on some of the portraits at Ham House . They are distinguished from true 'Sunderland' frames by the lack of auricular ornament, and by the corner ornaments, which are a cross between pomegranates and fleurs-de-lis. To have a Van Dyck still in the frame originally made for it is a phenomenon of enormous rarity. At least eight copies of this portrait are known, including one in the Royal Collections, first recorded in the inventory of James II , in addition to miniatures done from it. A very interesting Lely an adaptation of it to the portrait of a "Miss Ingram", with a leaping King Charles spaniel borrowed from Van Dyck's Lady in blue (?Lady Penelope Wriothesley, Lady Spencer) at the Tate Gallery, is at Temple Newsam. (adapated from Alastair Laing, In Trust for the Nation, exh. cat., 1995)

Knole, The Sackville Collection (accepted in lieu of tax by HM Treasury and allocated to the National Trust in 1992)